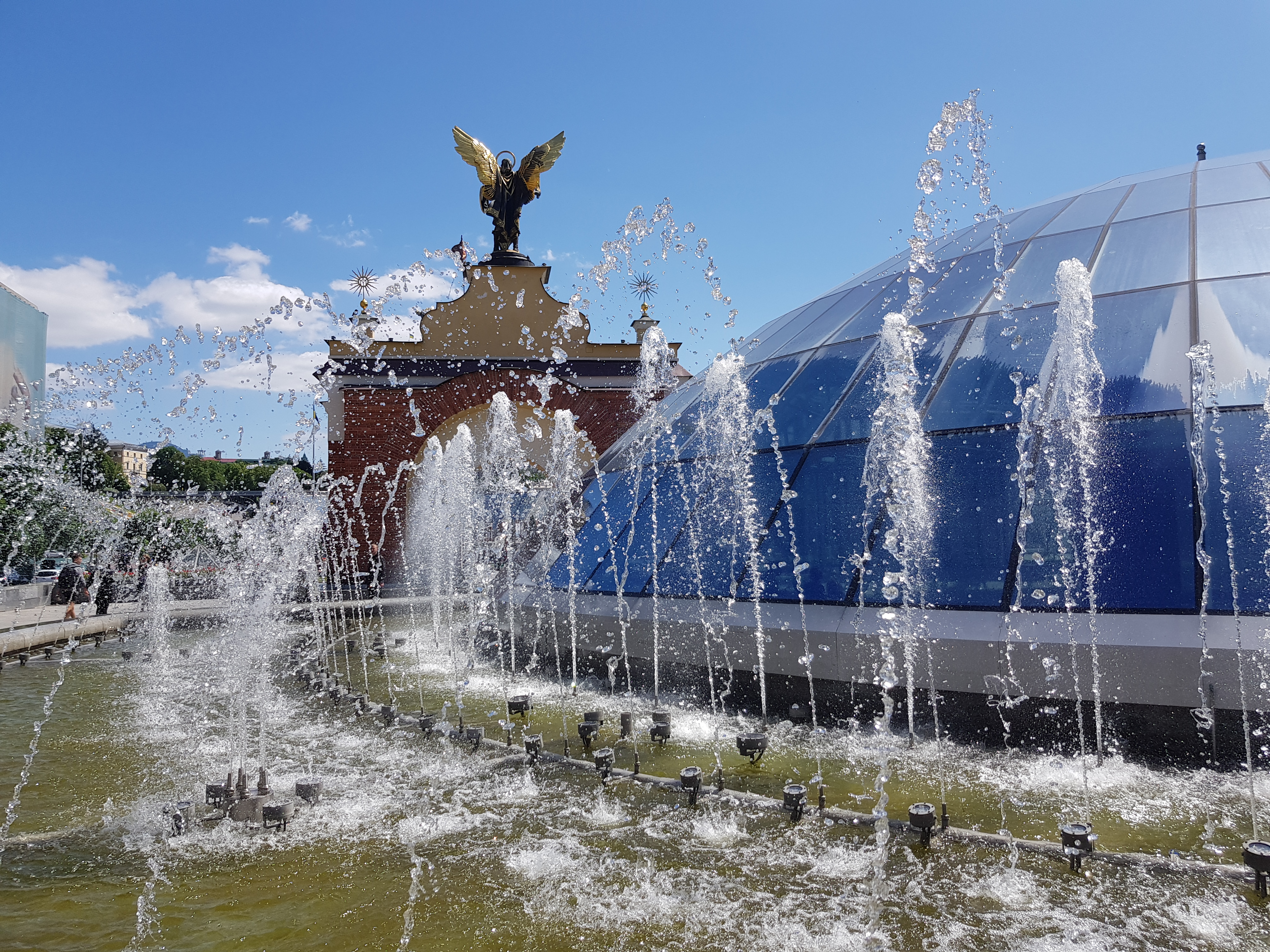 Sleeping as long as possible we get up and down to breakfast at 10:30 with 30 minutes before they close. Nice breakfast. We are missing Lasse who took a late night – or should I say early morning. He is out of order for the moment. So we decide to give him some more time to get awake and head for the Spa in the hotel. It is located in the basement an includes a pool, a sauna and a cold water basin. We take our time (some brave try the cold water… no way!) swimming and sweating until we get the message from the staff that they close at 13:00. I don’t understand why they only open the Spa from 8:00 to 13:00. Would be nice after a long day to relax here.

We finally are ready to leave at about 13:30 and the first top is a breakfast for our long sleeper at McDonald’s close by. We have fantastic weather. Blue sky and warm. Perfect. We explore a little bit more of the area around Independence square and there are a lot of people selling all kinds of stuff. You can take pictures with animals, buy wristbands etc. Magnus gets som pictures with pigeons, while Lasse, Simon and I go for pictures with a hawk. We knew it would be expensive. 😀 But everything is so cheap otherwise, let’s do some crazy stuff. 😀 We end up paying 400 Hryvnia for pictures PER POSITION. 😛 As we had both the bird on the hand and on the shoulder it is 2 positions which makes 800 Hryvnia (about 26 €). We tried to discuss the price a little bit but in the end he made a fortune from our pictures.^^ But it was fun and worth the money.

The first thing we wanted to see was the National Chernobyl Museum. So another expensive ride on the metro and a short walk and we arrived. Of course a geocache there that was found, but unfortunately the museum was closed on Sundays. Bummer.

Our plan after the museum was to take the funicular that starts at Poshtovea ploshcha up the hill. It is a 15 minute walk from the museum. The city here is quite nice. Some nice houses, restaurants, we pass a marked where Magnus had to buy a baseball cap. At the funicular (of course another geocache here) we don’t have to wait long. The ride is very short and also very cheap (0,13 €). A lot shorter than the one in Bergen I visited some weeks ago.

On top we get out and go to the St. Michael’s Golden-Domed Monastery. A large Russian orthodox church. We can enter. Different to our churches in western Europe. No seats, lots of pictures of saints that people pray to and give money to – could put up a picture of me. 😀 After a little break outside (and another geocache) we walk downhill directly to the Independence square that is not far away. Just a short snack at the golden arches and then to the hotel to get us another car with driver. It is so cheap that you can use it often.

Next and last sightseeing stop for the day is The Motherland Monument. The driver leaves us at the closest entrance to the park and we go in. A lot of old tanks and other war machinery is standing here as part of an exhibition. We pay about 1,50 € to enter the Local Conflicts’ Museum (2/3 of the price is for being allowed to take pictures). Some very old stuff is standing here. 🙂

Up to the Monument. The statue itself is according to Wikipedia 63 meters tall and the whole structure 102 meters. The soviets liked it big. And nobody removed the Soviet Emblems like all other places in the Ukraine. We also try to get into the museum of the Great patriotic war and the possibility to climb the statue. But they close in a few minutes. Again no luck with the museum. After some climbing on old tanks we are getting hungry and have to find a place to eat. Most of us want to have meat/Steak. The internet (which I bought early in the morning – this time working) is helping with finding a Steakhouse close by. The offer all kinds of steak and local brewed beer.

To sum it up, the food was expensive (especially for Kiev) and not that good. But we are full and can go back to the city center – by go I mean go to the next Metro station and take the underground. After a short stop at the hotel we go out to find a club, but don’t find anything that we like. We end up on the main street, sitting outside of a night club, ordering cocktails and a Shisha with some fruit tobacco. I have never smoked in my life so my friends have fun with me managing to cough a lot… thank you. Simon even waited til I coughed to take a picture of me coughing… No more comments on that.

Back to the hotel and the bar there. We want to go to an escape room game the next morning so the plan is not to let it get too late. The cocktails at the bar are great and I manage to get to bed first. Some of us made it a late night again. 🙂 But tomorrow is another day to explore Kiev.