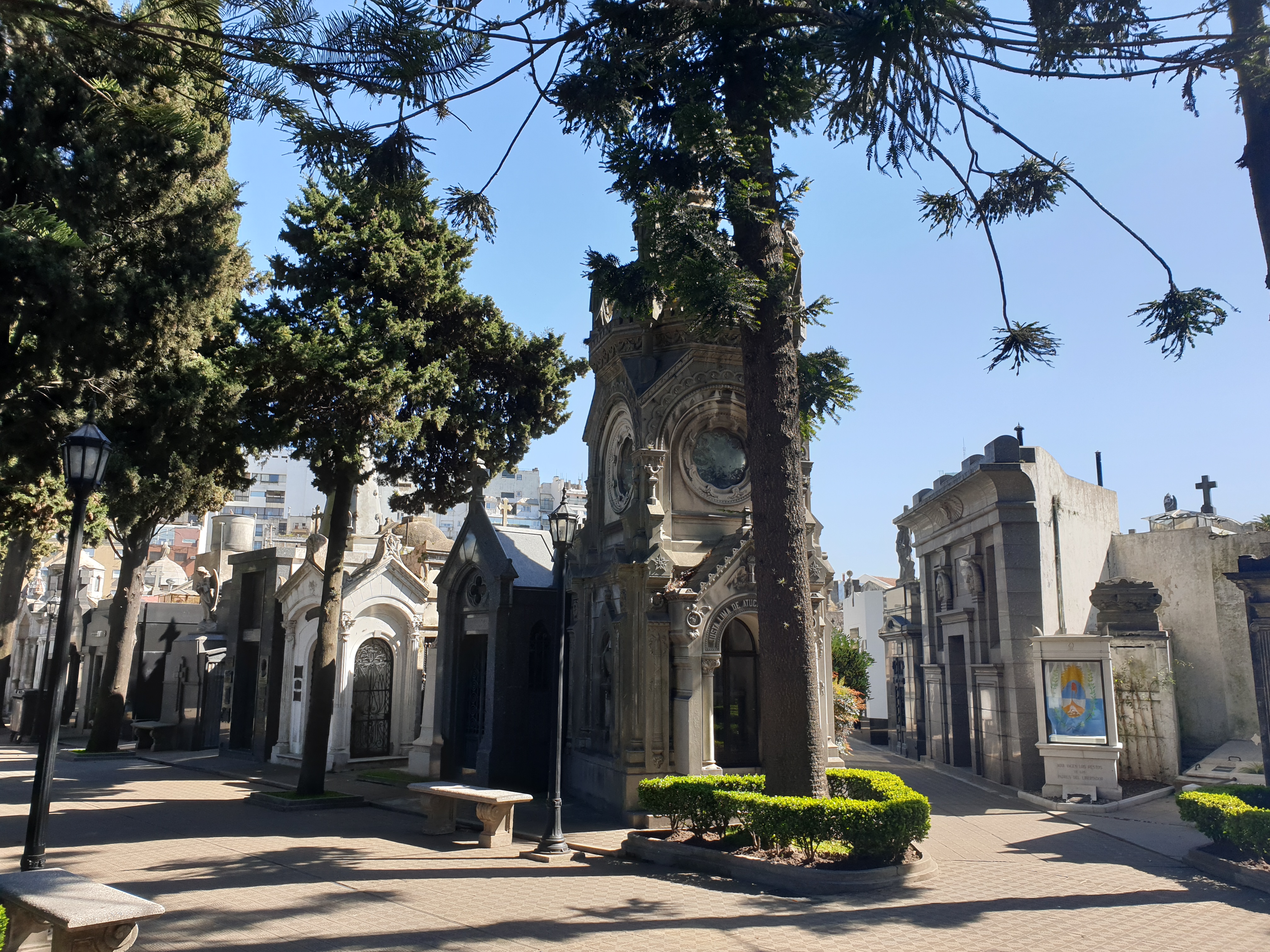 After a not to long night (jet lag is a thing) the first happening of the day is breakfast which is included in the room price. Just to mention it, I booked Expedia going through Viatrumf.no to get more Eurobonus points and may about 60 Euros a night. For a 4 star hotel this is very OK. But as you saw when I mentioned the prices yesterday… Argentina is very cheap at the moment. A year ago it would have been 4 times more expensive. Good for me, bad for the people.

Breakfast is good. Everything you need is on the buffet and – oh joy – Argentinians like a sweet start in the day. So mostly jams, just a bit of salami and cheese. I love that!

I am going to Recoleta cemetery which is well known for its “architecture” – if you want to call it that – and the grave of Evita Duardes Peron. But she was more than a film. Peronism is very present in Argentina’s politics and a very complex topic as we learned on the walk yesterday (She never said Don’t cry for me Argentina” – sorry). I get there by Uber, paying around 150 pesos. Uber is only half legal here, but not illegal. 😀 Worked fine for me. I could have taken a guided tour, but I think I don’t need to know all the stories of people on the cemetery. So I do a self guided tour – just walking around. Interesting tombs from all kinds of eras. Some new, some not in use any more, some with the coffins standing there.

Of course I swing by Eva Peron’s grave. Just a black tomb with a small sign who “lives” there. That’s all. And the hordes of groups are coming and cuing to take the picture. Some German who have no idea other than the movie they saw. I took the picture – still am a tourist – but I like to have the background knowledge, even if it is very basic.

Selfies on a graveyard is a new trend – which I also fall for. 😀 But after 90 minutes and a geocache which is on the graveyard (or better in the wall around it) I go out to the cafe La Biel. I have been contacted on my frequent flyer and bonus hunter forum. A guy who is also member is in the city and asked if we could take a coffee and talk traveling. Sure. Henrik, a journalist from Stavanger, is in the city for the Marathon – OK… travel around the world to run 42 km. He also has a podcast about collecting Eurobonus points. We talk nerdy stuff and traveling for about an hour, before we go our ways.

For me the next activity is a Hop On Hop Off bus tour around the city. The stop is close to Recoleta. Waiting for 20 minutes (they don’t seem to come that often) and I am rejected at the door because they are “sold out”. The bus is empty… And it is the cities tourist bus. WTF? Never heard such nonsense before and am a little pissed when he leaves. Directly behind is another bus and I try again. This time I am inside and the bus starts when he remembers, that they are sold out, BUT if I don’t tell anybody… he sells me a 48 hour pass. I get headsets, go to the upper (open) deck and start the tour. I want to go to La Boca, which is mentioned in every article about Buenos Aires. But first, there is no sound on the guided tour. Only in Spanish. They fix it after 5 minutes but the headset is such crap and the system so bad that you only get 50 % of the sound. Not good at all. But you get a nice impression of the city. They like big roads here. Takes about an hour to La Boca.

La Boca is the big Tourist trap her. Some art, but mostly tourist shops with souvenirs (go my postcards and the most expensive stamps ever) and restaurants that are overpriced. Nice, colorful houses but they try to sell you stuff everywhere or to take Tango photos – NO, Gracias! No.

One thing i find and that is Choripan. A street food of a barbecued chorizzo in bread with chimichurri and salad. It looked so good in one of the smaller restaurants that I ordered. Great taste. Friendly staff and cash payment again. I need more money (and with that comes the 500 pesos fee for getting it).

But after the virtual geocache is taken it is time to get on the bus again and see more of the city. The sound system is even worse than on the first bus. The tour ends in the city center and it is only a medium walk and a short underground ride back to the hotel.

Today I will try the tip I got from our guide the first day here. A small neighborhood restaurant where they sell one thing – meat! It opens at 20:00. A 3 stop bus ride and 3 minute walk. I arrive 20:05 and most of the tables are gone. The old owner shows me a place and then I take a look at the menu. Meat, meat and more meat. Hell for a vegan, great for a carnivore. 😀 First they serve an empenada, some different breads and a chimichurri sauce and another sauce on a cucumber and onion base. Nice. A local beer and some water and then choosing dinner. Of course one has to chose the best cut – tenderloin. 1/2 for 700 pesos, or a whole for 750 pesos. How big can it be (when you think about what you get at home). So I order the whole and some papas fritas.

And then the food arrives. Half a cow on a plate. So much meat. Never had a tenderloin that big before. Now I regret ordering a side dish. I ordered my meat al punto (which should be medium) but here it is more on the rare side, even some blue spots. But I have never eaten meat that melts on your mouth and tasted as good as this. For bloody 12 Euros… hell yeah. Hopping over the side dish and concentrating on the meat I make it. But I am full. The poor Asian couple that ordered a plate with different meats ans sausages will not make it. They got a mountain of meat. All in all with sides and all drinks the dinner is 20 Euros. Unbelievable.

I punish myself for this gluttony by walking all the way back home. Maybe I will dream of cows tonight. Happy cows that become a great dinner. With this, the day ends.

One thought on “Buenos Aires – Day 3 – Graveyard talks and busride”