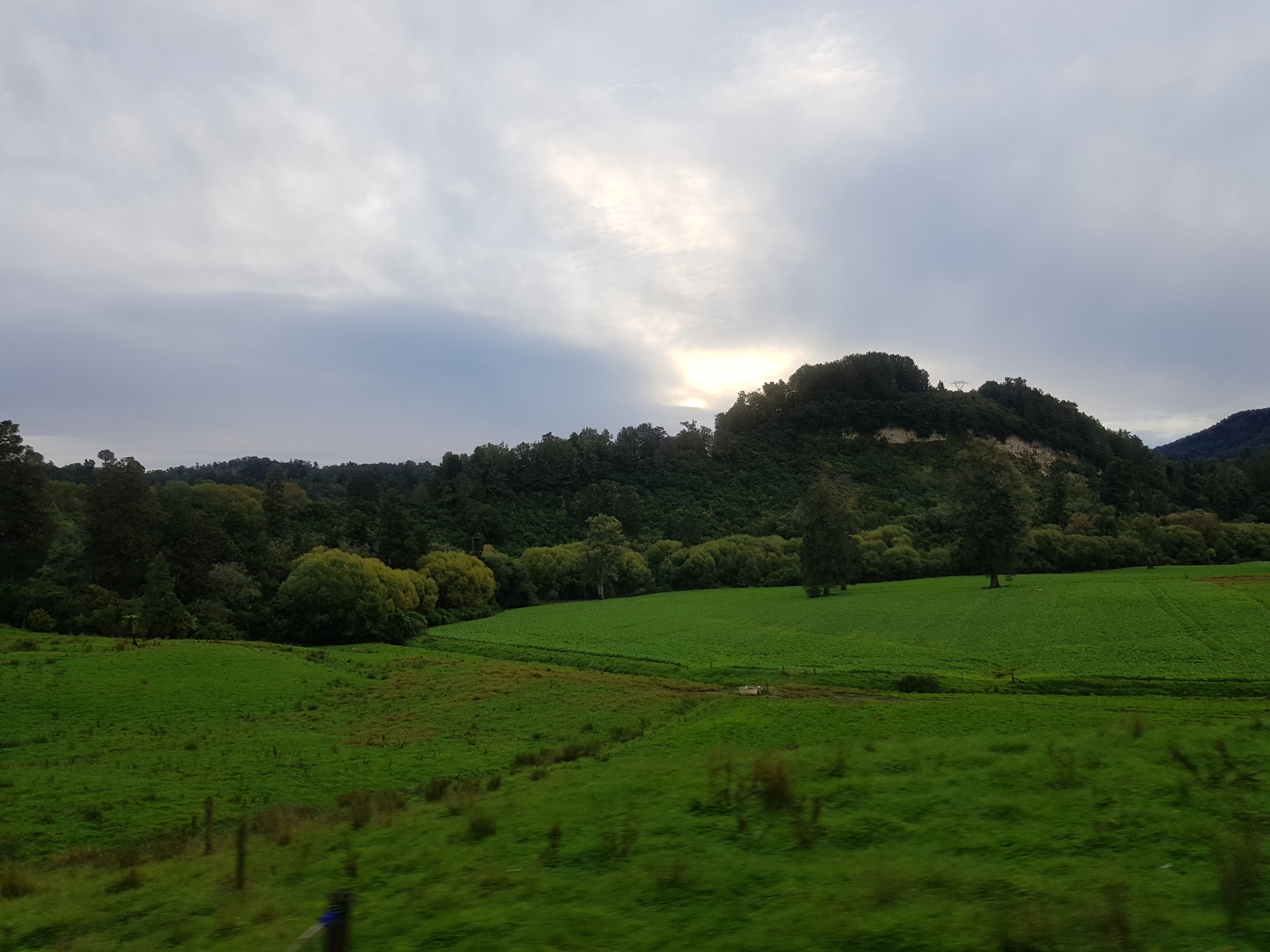 After arriving in Greymouth we have to wait for the luggage to be unloaded. Mine is of course one of the last and I now have 15 minutes to get some food and drinks for the bus ride. 6 hours in a bus… I can think of more exciting things. That will be a long ride with a nearly empty mobile phone and some audio books to listen to – as long as the battery holds.

I was so wrong!

First we had to wait at the bus stop which was connected to the platform at the station. Just standing and waiting in a storm. The wind was so strong that the luggage began to move along the platform on its own. People were hiding in every corner to avoid rain and wind – not many safe places here.

There is a bus from InterCity, but the driver doesn’t know if it is the bus to Nelson… The bus from the southern part of the island that was supposed to get us north to Nelson will not come. The storm has put some trees over the street south of us and the street cannot be passed. So this bus is canceled. That also means, that the bus at the station cannot travel south. So after some calls the bus driver gets the order to turn his bus around and to return to Nelson.  Good for us, bad for the 5 inside the bus, They have the option of staying in Greymouth or go back. After some back and forth 4 of them get a private ride as far south as possible and on decides to go to a backpackers north of Greymouth.

We leave with 60 minutes delay, but we have it better than all the people who wanted to go south. They have to stay in Greymouth for the night.

Talking about a boring long bus ride. I was so wrong. Peter, who was our bus driver, was one of a kind. It was more like a sightseeing tour. He told us new stuff about the areas we were passing all the time and really did a great job.

When we came close to the “Pancake rocks” which are special rock formations at the coast he ask who had been here before and half of the bus had not. So he said that he normally gave the people 40 minutes to make the tour, but because of the delay we had 25 minutes and there were toilets and a Cafe to get food. Fantastic stop. We did the round in 20 minutes including toilet visit and Cafe. That is how Japanese tourists must feel when they travel Europe in 3 days. Run, stop, photo, run, stop photo and so on. Impressive formations – but I have to take a look at the pictures later.

The road along the coast is one of the 10 most beautiful in the world (according to Lonely Planet) and that is correct. The landscape and coast is beautiful. One has to come back here and take a lot more time to see it. Peter stops at a scenic viewpoint which is not a scheduled stop, but he says it only takes 3 minutes and most people never come back so he wants all to have the opportunity. I have not listened to my audio book yet. Peter is doing a great job and did I mention that I only paid 1 NZ$ for the 6 hour ride because I booked very early? 😀 Talk about value for money.

That is how the whole drive goes. Stopping where we are supposed to stop, information about the towns and areas we are passing. Local history, earthquakes, cyclones, some not so truthful but entertaining stories. Driving through a valley into the mountains in the twilight. A thin layer of snow on the mountain tops combined with the light is just amazing. Again an area you have to discover with more time. I see that next time I have to go to the south island only.

Next stop at a cafe where our driver has to deliver newspapers. We are late but they are still open and we buy our dinner. The break is normally 30 minutes and we do 10. The last part of the drive is in the darkness and I just relax and close my eyes. Not much to see and no street light, so the comments stop until we get close to Nelson.

Peter has asked everyone on the bus where they will stay in Nelson. He is not going to the bus stop, no he takes a round through his hometown to get the people as close as possible to their hotels, backpacker and AirBnB. Talk about service. Never had something like that before.

Me, a French guy and a Canadian girl are dropped off at the hospital. From there it is a short downhill walk to Saint Vincent Street where I have my apartment. I find the place without problems. A nice room with a double bed and a small area for kitchen stuff. Notes with information where put out for me. I have a bathroom and everything I need.

After nearly 12 hours of traveling I have a small dinner and then I am of to bed.