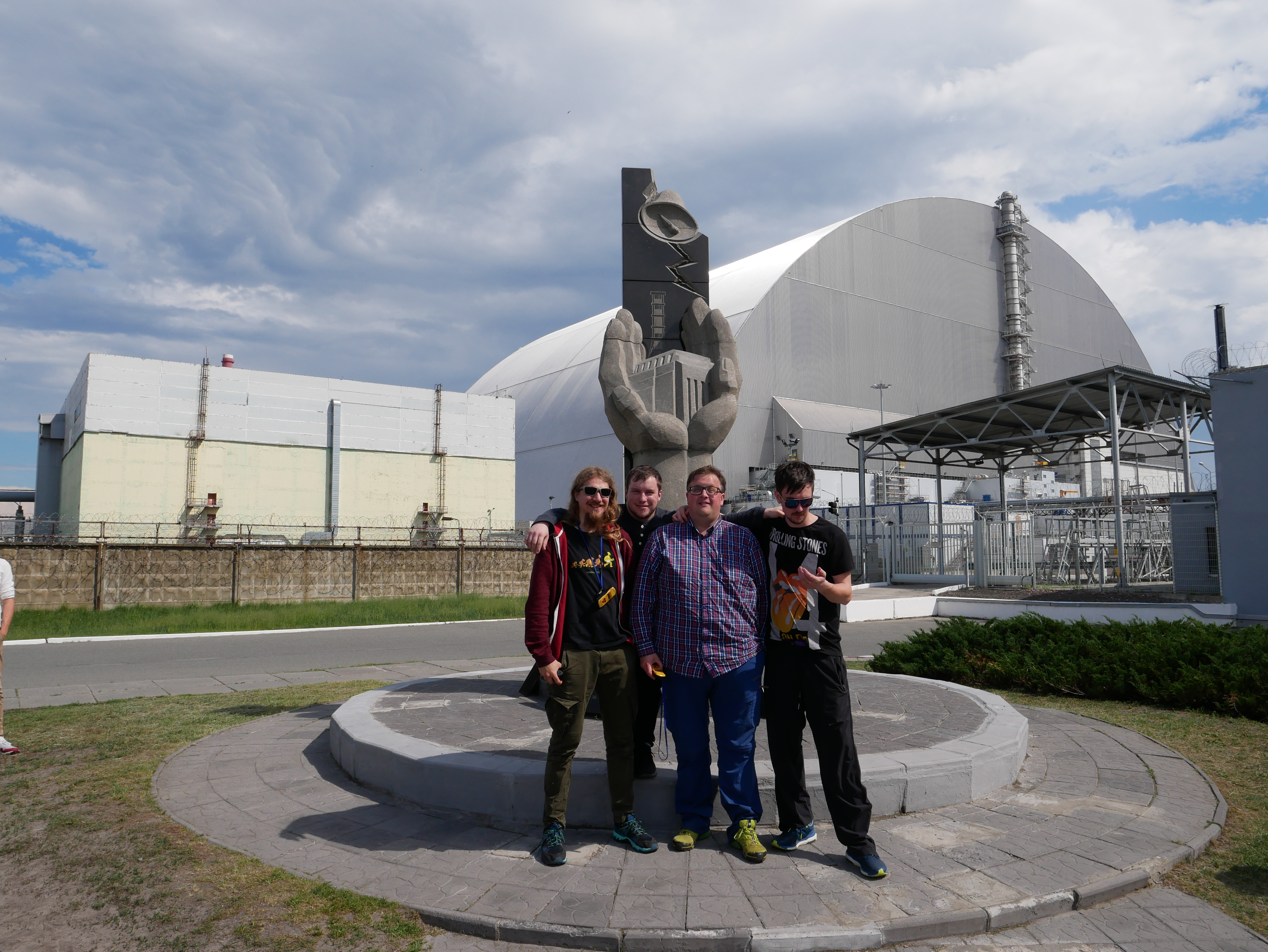 Early morning and we have to get up. The bus is leaving at 8:00 from the southern entrance of the central station. Breakfast starts at 7:00 and we were told we can be there a little bit early. The driver is ordered for 7:20. That should get us to the bus with time to spare.

After all is needed for the day is packed we head to breakfast. A very nice breakfast in my opinion. Bread, rolls, cereals, fruits, vegetables, juices, cold cuts, cheese, warm food, cake, coffee… enough to start the day in a good way.

Our driver is on time and we drive through the city towards the station. The closed roads seem to result in some detours. We made it to the bus on time. Not what we planned with a 4 person private tour. We are on a normal bus. Lots of people. Before getting onto the bus our passports are checked against the records from booking (has to be the same) and we paid for our trip (which was about 104 €). We also get handed a certificate for the trip with our name on it. The radiation dosage will be put in on our way home.

We start a little bit late (a lot of paper work and some late people). All seats of the bus are occupied. After driving through the city we enter a more rural area. Our guide starts telling us about the trip, we get to learn about the rules we have to follow on entering the zone (no photos) and inside the zone (don’t sit down, don’t touch too much, don’t leave the group etc.). After all the important stuff we learn a little bit more about radiation, Chernobyl and the accident from 1986. For the rest of the about 2 hour drive we get to see parts of a film about the accident.

When we arrive at the checkpoint for the 30 km zone (Dytiaky), we get out of the bus and go for the souvenir shop. We all get original Soviet gas masks from the 70s (about 11 €/piece) and a lot of small stuff. You just have to buy that stuff, there is no way around. 🙂 And again – it is all extremely cheap. When we get called back to the bus, we pass the barrier and stop again. Now everybody can take a bathroom break. There are not many in the zone. Let’s just say the bathroom was an olfactory disaster. 😀

But now we are in the zone. Or at least the first part of it. First stop inside the zone is the village of Cherevach. If you are not told that there is a village, you don’t see it. We leave the bus and explore the empty houses. A special feeling entering the old homes of people, walking on the wooden floors (and you have to be careful where you step). Of course it starts raining when we are out of the bus. Most of us left the raincoats in the bus. So after the exploration many come back quite wet. But luckily this was the only time we got rain.

Now the next stop. Our first “Hot spot” (a spot with high radiation). The place is called Zalissya. The place of the hot spot is clearly marked. Normally you would think that everybody would try to avoid radiation – not all the people with Geiger counters on the bus (we 4 had one of course). People looking for the spot with the highest radiation. 😀 Found some of them. We also enter an old kindergarten where the toys, books and beds are still standing.

On to our next stop, the town of Chernobyl. We don’t get out of the bus, but they have to deliver some paperwork. Now we are on the way to the good stuff. We are entering the 10 km zone around the reactor. At the checkpoint of Leliv we have to wait in the bus, while our guides do the passport check. This is like entering/leaving a country. As the guide said – a country inside the country. But after a short time, we are inside.

Now our bus turns left to the first big thing to watch. The Duga-3 station or the Russian woodpecker transmitter. Our bus stops at the small parking lot and we walk towards this once top secret installation. It was part of the soviet early warning system to detect ballistic missiles during the cold war. The station was so powerful, that countries all over the world complained about interference. The structure is massive. Steel everywhere, symmetrical – just amazing. I am still waiting for my radiation alarm to go off (and am a little bit jealous that Simon seems to be a radiation magnet^^). Walking around, taking pictures. Simon and I want to get the first geocache of this day. Not the most usual place to find a cache. Of curse I pressed the wrong button on my GPS and we have to go back and around the long technical building to get it. Cool stuff. On our way back we get inside some of the buildings and return nearly last to the bus. But one has to do what one has to do. 🙂

Now we are getting close to the power plant. But now it is time for lunch. The place we have lunch is special, too. The canteen of the Chernobyl power plant. No photos allowed inside. Just of the food. The people working there don’t like it. Before we go in, we have to pass a radiation detector. Nothing found there, so upstairs to get into line with all the other people. It is like a canteen you know. You take a tray and get the food. We get a small salad, a Borscht (beet soup with potatoes and onions), mashed potatoes with a meatball and some gravy, a sweet cookie and some dry white bread (got better after throwing pieces into the soup^^). I addition we get two drinks. Peach juice and a smoked apple juice. I liked the food. Simple but filling. Could have used some salt and pepper but over all nice. What was not nice was the apple juice. Ever smelled on a burned stick from a camp fire after you put water on? Now imagine to lick on this stick – that was the taste. Only one of us four drank it. 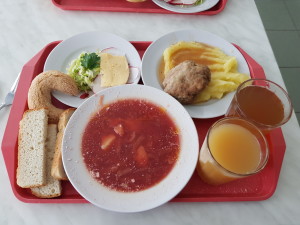 After lunch we got back to the bus and drove towards the Chernobyl Nuclear Power Plant. A short stop where we could see the unfinished building of reactor 5 and the sarcophagus of reactor 4. We are so close. The radiation levels are not high at all.

Next stop is THE stop. Directly in front of reactor 4. The one that had a meltdown in 1986. After the mandatory (group) photos some checks with the Geiger counter. The radiation is about 3-4 times above the national limit, but only 1/2 of what you get on a flight. Amazing engineering that was done here. Entering the sarcophagus wouldn’t be a good idea for us. I don’t know why, but we weren’t allowed to look inside. 🙁

Leaving for the ghost city of Prypiat. A small stop at a place where we can see the red forest. A place nobody is allowed to enter because of the high levels of radiation. We find some hot spots around and everybody is nearly crawling to get high readings. 😀

But now we are in the city. Entering on an old concrete road through a forest (that wasn’t there 30 years ago). We split our group and the guides take a walking tour through the city. Big buildings in soviet style. You see what decades of no maintaining does to concrete buildings. We are not allowed to enter the building because they might collapse.

We bend the rules a bit here and there, of course. To exciting not to do a little bit – at least step into the entrance halls of some buildings. There are some geocaches placed here. While Simon watches out for people at one spot, and me avoiding the group in two others, we find 3 geocaches in this city. Plus an earth cache.

Last stop is the stadium. When the guide tells us, that we are in the middle of the soccer field, we only see trees. Just a little bit later we get to the stands. Here we are allowed to got onto the building, but not inside (which is a little bit funny, because if the roof comes down you are on it, just not under it…).

Finally we walk back to the bus for our ride back to Kiev. A short stop at a place where they show machines that were used on the reactor when the accident happened and then a stop at the monument for “Those who saved the world”, the people that rushed to reactor number 4 directly after the accident happened. All without knowing of the danger and without any protective gear…

Time to exit the 10 km zone. A radiation check of everybody is done fast and we are on the way to the 30 km checkpoint. There again, both we and the bus have to undergo a radiation check. Simon got a red light… must have been something on his shoe. After stepping out and in again, he can pass. The result of hunting hot spots. 😀 Just some more souvenirs/postcards and snacks at the shop there and back to the city.

We now get our radiation readings and put them onto our certificate. I got my 0,003 milliSieverts on the trip, which is equivalent to an hour of flight. Top in our group of four is…. Simon. 0,006 but the guide said it was impossible and he got the 0,003 milliSieverts written down. But we all know he got that much – running around looking for the most radiation. 😉

Back in Kiev in the evening we take the Metro to the hotel. Cheap… 0,16 € per ride. We go to Independence square looking for food and end up in an Ukrainian restaurant. We try some different foods and some cocktails before we go back to the hotel and conclude the evening in the bar with some more cocktails. Tomorrow will be a day of exploring a little bit more of Kiev.