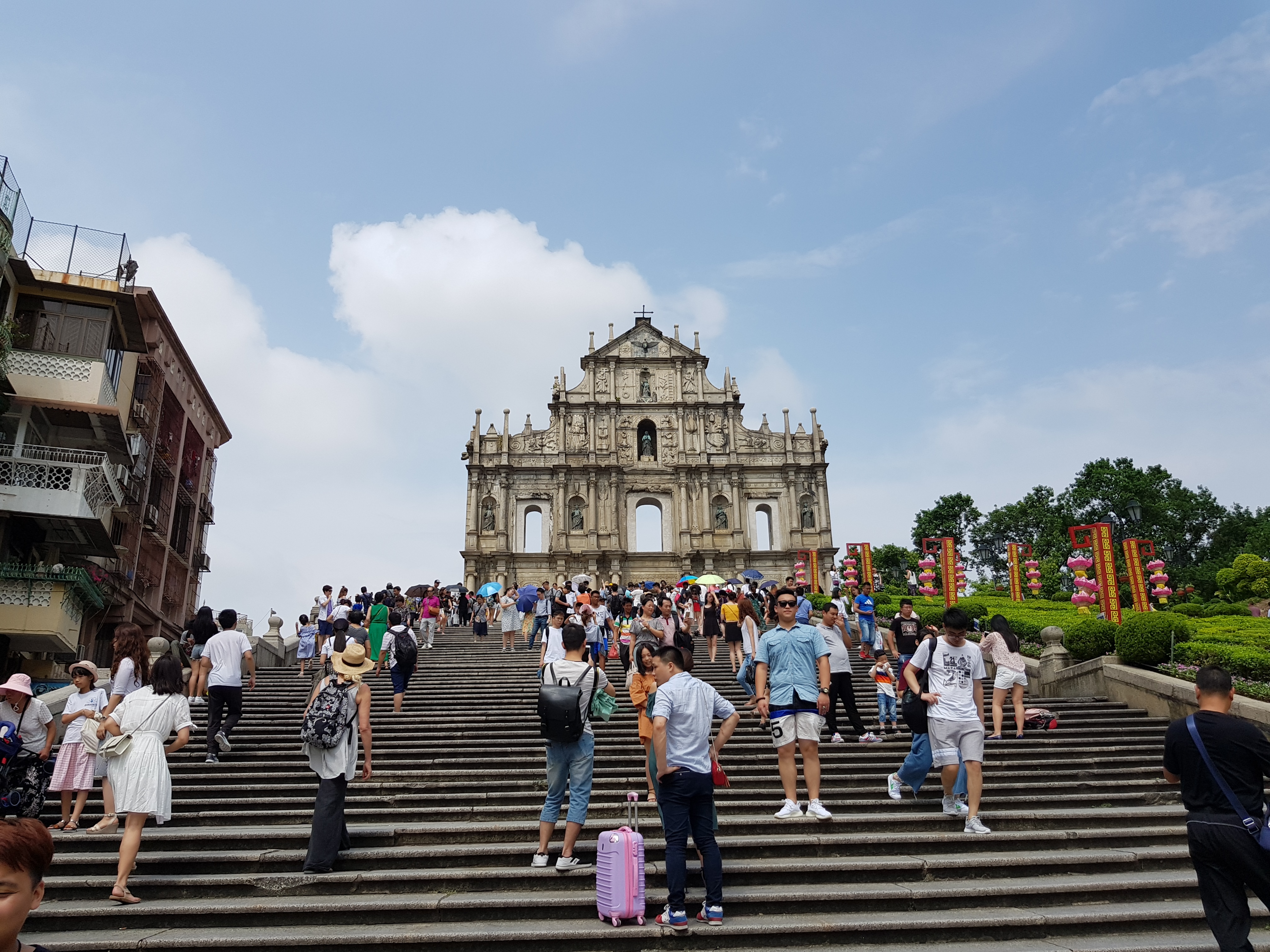 Up at 7:30 am like every morning. Breakfast and then off with the bus to the Macau ferry terminal. An easy ride for just 5,60 kroner. Try that in Norway. 😀 I tired to book a ticket in the app and online, but didn’t manage to get pass the passport check. Some problem with passports that have letter in its serial number.

Long cues at the ticket booths, but there is no one in line for the TurboJet Super class. Ticket double the price, but you get a separate waiting area, standby for an earlier ferry than booked, food and drinks served on the 55 minute trip and you can leave the ferry first to be the first at immigration. As it is, Macau is under the same one country-two systems regime like Hong Kong. Before boarding the ferry, I have to pass immigration, deliver my departure card and then leave Hong Kong.

I am boarding as one of the last before departure and get a quiet comfy seat in row three. Buckle the seat belt (the sea makes the catamaran shake quiet a lot) and as soon as we have left the terminal, they serve some kind of food. A sweet roll, a muffin, Water and some kind of fruit jelly (which is extremely sweet). And you get a soft drink of your choice. No 5* menu but OK. It is cloudy today. But warm and humid like the days before.

Arrival at Macau after about 55 minutes. First to leave the boat and go directly to immigration. And again no stamp in the passport, just another small piece of paper. Has to be stapled to my passport later. 🙂 Entering the arrival hall there are guys everywhere that want to get me on a tour bus. But my plan is another. First I have to get a SIM card for my phone to have Internet here. The sim is valid in three days and will work in Macau, Hong Kong and mainland China. Not bad for 100 kroner. Next to get a bus to the center. They take Hong Kong Dollar and I have just enough coins to pay the 3 dollar ride to the center. The buss passes the casino area, but I know that much from my visit to Las Vegas, that I don’t have to check out that area. I want to see moreof the old, Portuguese part of the city.

Soon I stand in the middle of Macau. This doesn’t look like China, but some southern European city. Nice. But I have no idea where to go first, so I do the geocaching approach. Interesting places normally have geocaches. First one is found fast and the new country logged on project-gc.com. Now on to the Sé Catedral da Natividade de Nossa Senhora, one of the many churches in the area. No luck here but nice buildings.

I have to through alleyways that smell of all kind of good – and nasty – food. They take care of the old Portuguese buildings which are part of the UNESCO World Heritage center. But the rest is not in that great shape. Moving on and I find an old fortress on the map. Something that has to be checked. I just forgot one thing… fortresses are located on the highest sport in the area. And the streets are steep uphill. Passing a small Buddhist temple and climbing (and sweating) some more.

On top the first thing to do is to buy some more drinks in a small kiosk. The old lady there is very nice and hands me some paper tissues to dry my face and offers me a place to sit. Another tourist gets the same treatment. I love air condition. There is not that much to see in the fortress. There is a museum but I only have one day to explore the city. So I just take a walk around, find another geocache (with all to many muggles around – but when they left I could easily grab it). You can look to the other side of the river to mainland China.

After some time here I leave to get down the hill to the ruins of Saint Paul’s. Not much again here, but a lot of people walking around. Large stairs leading up to the ruins, and a favorite photo stop as it seems. Have to do it, too. 😀 The geocache is a little  bit on the side and fast logged. This one is not a nano. Otherwise Macau (and Hong Kong) is a heaven for nano caches. Now it is time to buy some postcards to send home and a souvenir to hang on my travel wall at home. I buy a cheap fan made out of wood and chines motives. It fits the memory of the warmth here. 🙂 And 59 kroner is not to much for it. Some cheap stamps later I take a stroll down the busy main street. A lot of chops and they sell a special type of meat here. As I am not hungry in the heat, I keep to a mixture of water and soft drinks for some calories.

Now I walk to the other side of the city center, towards the library. A nice building, but the cache there is not to find. But you can get inside and sit in the garden. A great spot to write some postcards. And perfect timing. While sitting there and writing, the rain starts to pour down. I am as dry as I can be (minus the sweat) when I continue my walk towards the St. Lawrence church. Nice nano cache here. And walking on along the empty road. A stop at a small food stall, to buy some drinks (again). No English here, but hands, feet and words like “Fanta” do work here.

Passing the Largo do Lilau I arrive at the Macau Maritime museum. But no museums today, just a short visit to the temple on the opposite side. Now I think It is time to get back to the ferry terminal. But no more coins left to buy more then one bus ticket, so I have to walk a little bit more to get to the right bus stop. My route is along the water to the Macau tower. I just have to go in the middle of a highway at one time, because the sidewalk disappeared. No problem. 🙂 No find of a geocache there because some people use GC as a sitting spot. Now I get back towards the city center. A short stop as a McDonald’s for a small Cheeseburger and more drink. Now it is just to get back on the bus and back to the harbor.  Easier said than done. The buses stop where they want and the third buss stops where it should and I can hop on the bus to the terminal.

At the terminal I am booked for a ferry 45 minutes later, but thanks to the more expensive ticket I only have to wait 30 minutes and get a ferry early. Immigration is fast and the arrival card for Hong Kong is in my pocket to fill out. On the boat again some food, but I pass this time and just take a drink. Arrival in Hong Kong when it already is getting dark. I feel tired and will take the next bus to the hotel. The bus stops not directly at the hotel, but 200 meters before. The street at the Pok Fu Lam village is blocked and the Mid Autumn festival is going on in the villiage. I follow the people there an take a look around. The straw dragon that I have seen yesterday stands in the middle of the lawn there. The people are chatting and eating and talking – I don’t get a word of what is said. But interesting to see.

Now to the hotel. Some food, a shower and into bed. Tomorrow I have a plan… 🙂