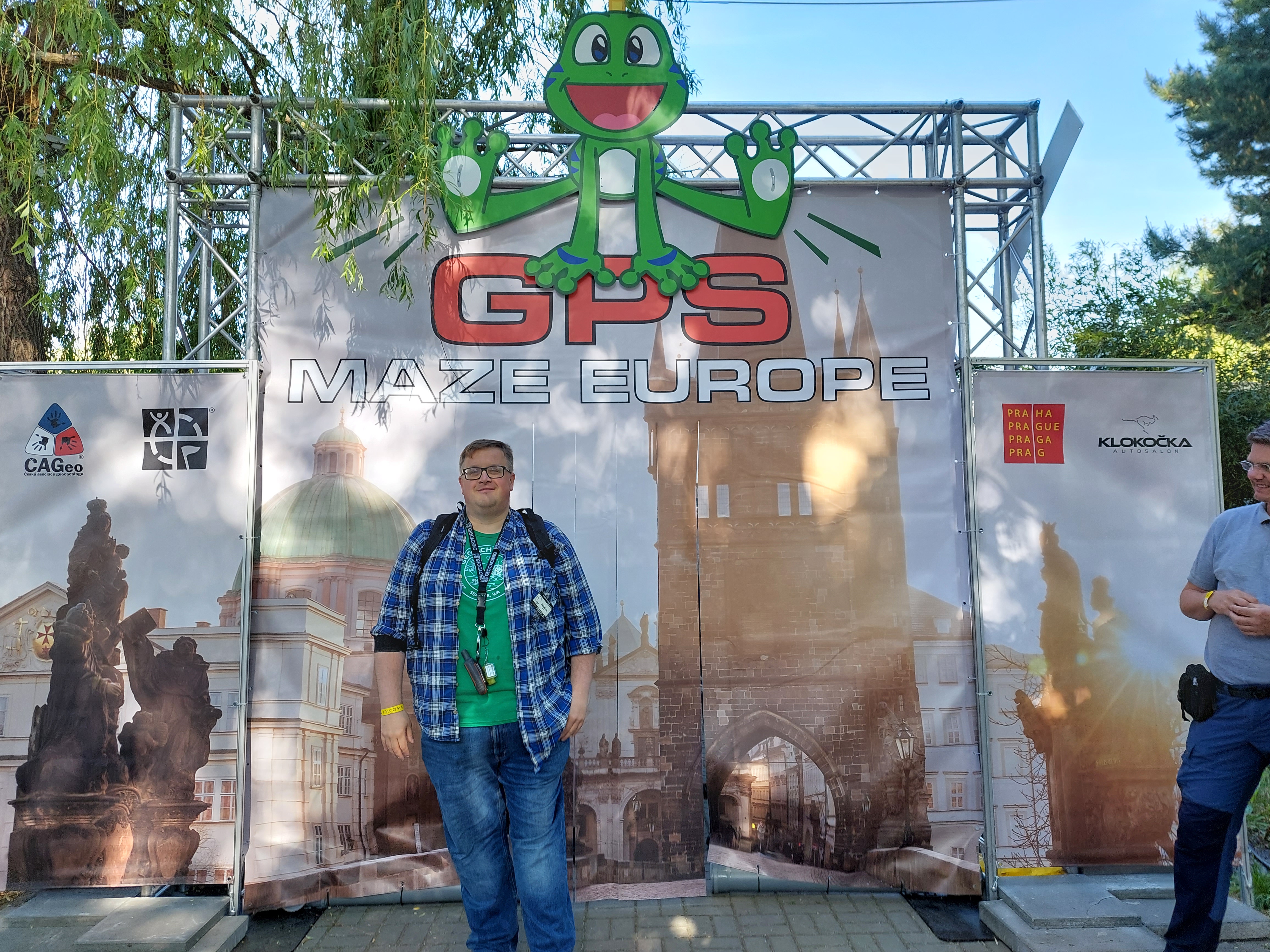 I have never been to a bigger Geocaching event other that the small meet and greets, community events and CITOs. That had to change.

So what do you do to change that? Easy: Just hop on a plane for a long weekend to Prague, Czech Republic. This is a typical move by me.

The GIGA event should have been hosted in 2020 for the 20 year Geocaching anniversary. As we all know, something happened that made us all stay at home more that we wanted to.

Not much more to do, than pack the bags, jump on the plane and land in Prague a few hours later. An Bolt ride later (it was the most convenient, but not the cheapest option) and I arrive at my hotel. A cozy little place off the beaten pass. The receptionist is not fluent in English, but the communication works out and a few minutes later I am in my hotel room.

The room is nice and basic and has everything you need. But thee is not to much time, there is an event that I want to join. Thanks to Bolt and other operators, I have a good and easy ride to the event site with an e-scooter. Quite many apps I have for that purpose. Some of the event is already happening.

Some stands are open and since the main event i s tomorrow I just get there and am lucky to get one of the few remaining official Geocoins for the event. Pluss some extra stuff I wanted to have.

The logbook for the event is signed fast and then it is wandering around, getting some geocaching done and then it is time for some (Italian) dinner and then bed.

Next morning no breakfast. I booked without, but not needed. There is always something to find. I go directly to the event area and am second in line ( a little bit to early), since I doesn’t want to stand in cue for a long time at the Maze. Time comes and the doors open… but there have been several doors. So I am in a line for the Maze, but not a bad one. Meating other Norwegian Geocachers and small talk makes the wait bearable.

The Maze is – underwhelming – a lot of local geocaching history, a lot of it in Czech and some souvenirs one can pick up. I don’t like the wooden coins in Europe. Pathtags are so much more stylish… But my first Maze is logged. Next to the community event and a log there. And then there are a lot of Adventure labs around the area. My find count id definietly getting up.

And there is one challenge I need to solve today: Getting as many different types of caches logged in a day. So eScooter and into the city. Traditional, virtual, multi, mystery… I get a lot done, while also sightseeing the city (and getting lost one time, but the Bolt Taxi gets me back on track). But there is one more cache to grab, one of the rare Webcam caches. There is i bus going there, so why not try to get this one, too. Not a problem, the ride is not long. Not the only one there. Somebody had prepared the cache because you need to have a broom or something like that in you hand. Everything you need is on a bench. A log and an ice cream later I am back on the bus to the city. There is an evening event somebody organized.

Many people at the event. But there is a next day and several events tomorrow. Dinner, hotel, bed…

Next morning with an eScooter to a park further away. A CITO event (we are cleaning up the park and surrounding areas). Combined with an Adventure lab you can collect litter with a grabber and a plastic bag in your hand. Some are just going without collecting… well well. Cheaters. 😀

After that is done I am going to the other side of the city center to my own event. A small park. Some geocaching on the way. A lot of people attending. But there is one more event, so through the center (you can see who is a cacher by the clothes and GPS you see) – finding a cache here and there and a new event close to the event area. Again a lot of people there.

Let’s go to a last event in a part of the city I haven’t been to before. My feet are an absolute hurting mess, but I have to get there. At a church there is the last event for the day. Many people one has talked to before this weekend. I even exchanged a Pathtag for a personal Geocoin. A guy from the US who came only for the Giga… crazy.^^

And then there is the day where you have to get home. But since the most Norwegians have to take the same flight there is an early morning Norwegian event in a park in the city. A Bolt takes me and my luggage there and some more talk about caching, some more TBs and logs and then one last Bolt to the airport.

A very long but nice weekend with a lot of caching. But there is one more Giga Event this year I will attend. Keep tuned!