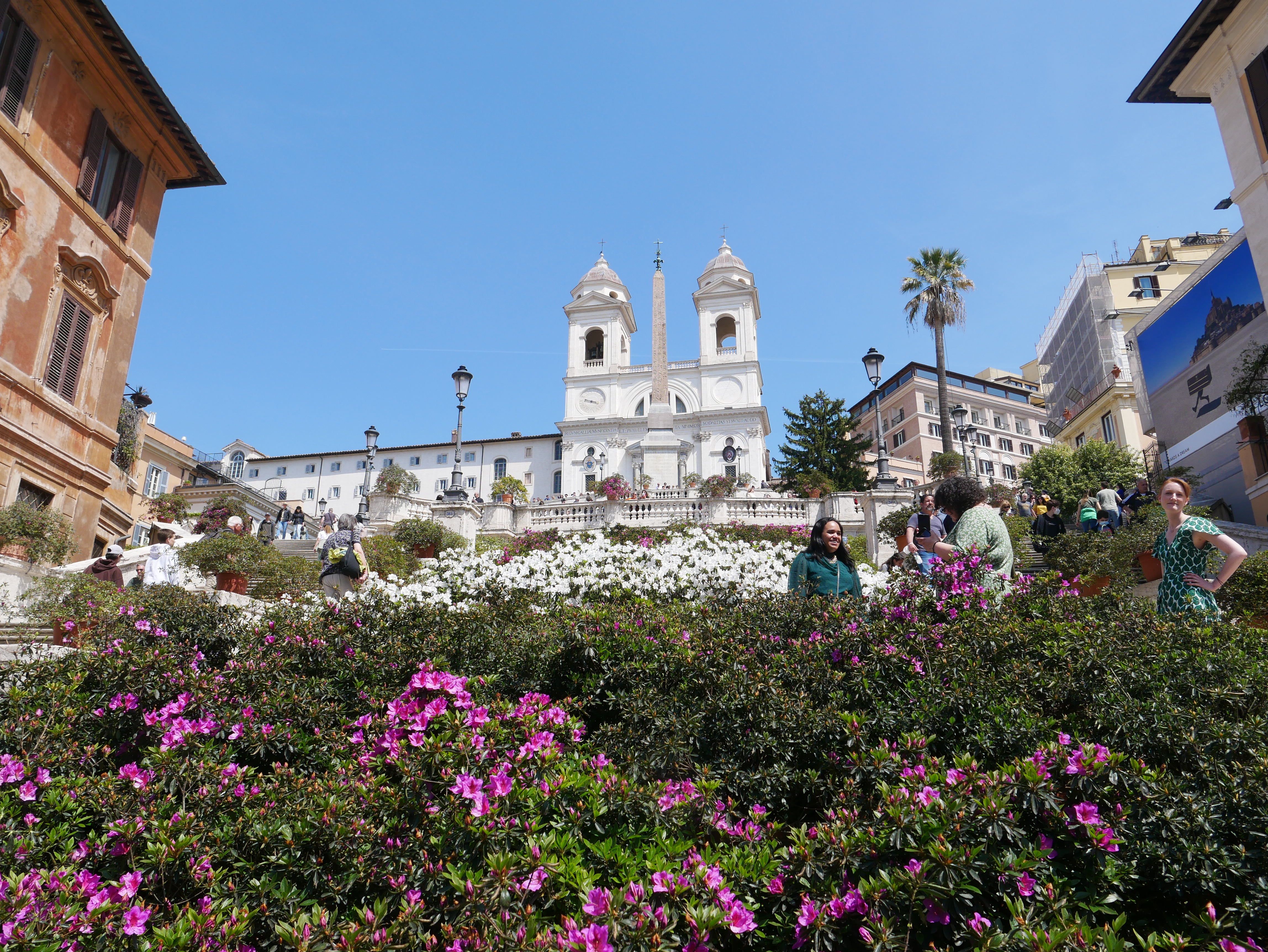 After getting up and no breakfast (since I booked without) it is definitely scooter time again. Because I want to go to the city center.

So Colosseum it is again, after navigating a little bit wrong i do find it. Traveling by scooter in the city is an experience. I am not allowed on the sidewalk and not all streets have bike lanes. And then you have to consider the way people drive in this country. But somehow I make it alive.

Since the Colosseum is of my list, let’s try to find a Geocache. But yeah… it is inside the Forum Romanum which is again full of people (the week around Easter is a main travel time it seems). And it is a lot of ruins where you have to wait in a long cue and pay quite an amount of money to see it. I try navigating without google and end up in a dead end with a small chapel. So I have to go all the way back.

After finding my way back I take a stroll along the Circus Maximus toward the Altare della Patria. A big marble building which is the national monument of Italy. Just look it up on Wikipedia. A lot of history there. You can go up the stairs and have a great view. And it is free. You have to go nearly to the top (they charge for the elevator on the real top and the panoramic view – of course) and then you are guided by signs through the monument out to a side door.

Did I mention that it is still mandatory to wear a face mask inside in Italy… so mask on.

This is a walking day. In the afternoon, I booked a guided tour where I will see all the important sights of the city. So the direction is to the meeting point but there is a lot of time left. So some geocaches have to be found on the way. Which leads me into streets which are a little bit more quiet than the main tourist streets. But in the end I get to the hot spot – the Trevi Fountain. And again – mass tourism is a bitch. There is no space to really look at the fountain because everybody is trying to get the best Instagram shot. I get some shots, too – but not for Instagram. It may be better later in the day when everybody is at their hotel or eating.

So it is just wandering on through the streets of Rome towards the other main Instagram point – the Spanish steps. I feel like a bad tourist, because I get there. Again a lot of people.

Since I have some time I decide to by a 72 hour ticket for the public transport and take the underground to Rome Termini. I needed to check out the supermarket to get some stuff to drink and eat for tomorrow (and today). This is much cheaper than what you by in the city center. Taking the underground back to Piazza di Spagna and there is still an hour left until the meet up. Best to sit at a small fountain, look at people and read until it is time to get to the guided tour.

I am already tired from walking but the best thing to get to know the basics of a city are these walking tours which I book in every city I travel to (if offered). Meeting is very strict (must be the pandemic rules) but after some time our group is gathered and the English tour can start (they also offer Spanish).

The tour is good. The guide as a guy close to 60 with a great love of obelisks in the city (I think we saw every one of them :D). But he has a lot of knowledge paired with humor. It is to much to list all the quarters, palaces, statues and sight we have seen. Of course the Trevia fountain, the Piazza Navona, the Pantheon and several other places, churches and much more is included in the tour. With many spontaneous detours which extended the planned 2 hour walk to a 3 hour walk. Do I have to tell you how my feet feel? But is was worth every minute. But you can never remember all the stuff you have been told.

Now that I have a bus ticket, I take the bus home to the hotel (Google helps again with giving me the best connections). I checked for a place to eat and found a local Trattoria. And I mean local. The tables have those red and white chessboard pattern and only local people here. The owner does not speak English and the menu is in Italian. Not a problem. Hands and feet and single words help. I get fresh (!) spaghetti with Pecorino cheese and pepper. So simple but so tasty. Amazing. The dessert was not as good (Panna cotta) but hey. No big deal.

The hotel is just around the corner and it is time to fall into bed, dead fraom walking 15,5 km today – but seen a lot. And more to come tomorrow.