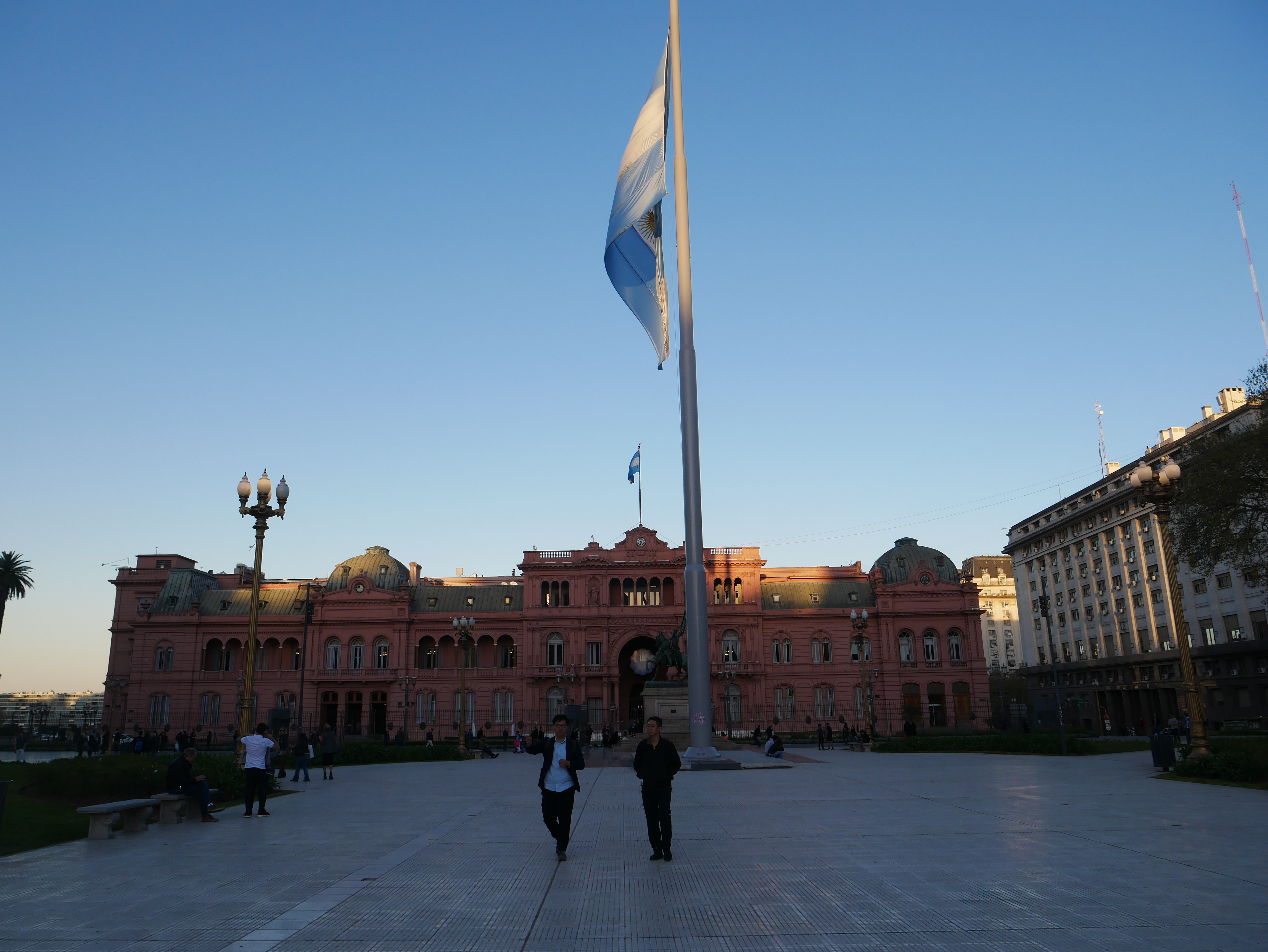 After landing the first thing was immigration. Took some time as several flight from all over the world arrive around the same time. Some people seem never to have traveled before… But after the standard of taking a thumb print and a picture as well as stating the place of my stay I got the stamp in my passport. 🙂

The luggage was already there and it was just out of the door. Behind the first door at arrivals there are some booth that try to sell you expensive taxis to the city or Bus tickets. But I hate aggressive sellers. So I went out into the airport main terminal. What to do first… Public transport card. SUBE is sold at most small shops. 90 Pesos for the card… Cash only… Sh**. Welcome to the era of cash payment. I found an ATM and after several tries I got my first 3000 Pesos… in 100 Peso notes… My purse was packed with money, but it was only 50 Euro.

Back buying the card and then putting money onto it. Cash of course. After several tries of getting 3x 100 Pesos onto the card I used google translate to check what the machine was telling me. 200 Pesos is the limit (3,20 Euro). Did I mention that my Spanish is not existent? 😀 But how far can I get with 200 Pesos?

I was tempted to by a SIM card at the airport but remembered that I found the price on the internet a round 270 pesos for 3 GB. 800 pesos is a tourist trap. Made my way out of the terminal and following the signs to public transport (I understood that). Bus 8 will get me to the city center. Meeting and talking to an US American with the same plan. I know now, why the SUBE card only takes 200 pesos. The tour to the city is 23 pesos, which is around 40 ct. Wow… that is cheap.

Not many people with luggage in the bus. The trip takes more than 90 minutes because the bus drives circles and squares and stopping everywhere. And it is kind of rush hour and the bus is filling up with people. Very many people. At least you get an impression of the outer areas of the city. Some seem very poor – or at least not maintained, some seem better off. They don’t seem to have architects here. Many houses look like concrete sheds.

Close to the city I switch on my terrible expensive Norwegian internet to get Google Maps and my position. It tells m to take the underground to Congreso and walk 200 meters to the hotel. Great idea. The bus is not so comfy. Another 19 pesos for the underground and then directly to the Hotel.

Hotel Savoy is 300 meter from the parliament in the heart of the city. Perfect location, close to public transport and all you need. I am there 3 hours prior to check in time, but the receptionist gives me a room anyway. I get an upgrade and 15 % off all food and drinks, thanks to my Expedia VIP booking. Nice. The hotel looks great. High ceilings. The room is big and modern, has a nice bathroom with bathtub, TV, work desk and a small French balcony. I like what I see.

After half an hour of relaxing I want to use the day. Firsy a SIM card at CLARO which has a shop only 3 blocks away. You need you passport and cash (again). The SIM with 3 GB and free WhatsApp use costs 270 pesos (I was right) and after 5 minutes I am online.

Next a cup of coffee and a croissant close to the parliament. I will take the free walking tour from there at 15:00 – like I do such a tour in every cuty I travel to. A good first impression of areas and the history. The grpup is big and divided into Spanosh and English. A 3 hour walk with a lot of history and recent and historic politics. Intresting and complex. The informative tour ends at the Casa Rosada (the pink house) which is the prsidential palace. After a warnng about pickpockets in the city (watch your stuff) and tips about restaurants (steaks and empenadas) I walk back twards the hotel.

Dinner at the hotel. Some pasta for a reasonable price. After that it is just going to bed, because it was a long journey. Tomorrow is a fully planned day. Good night.