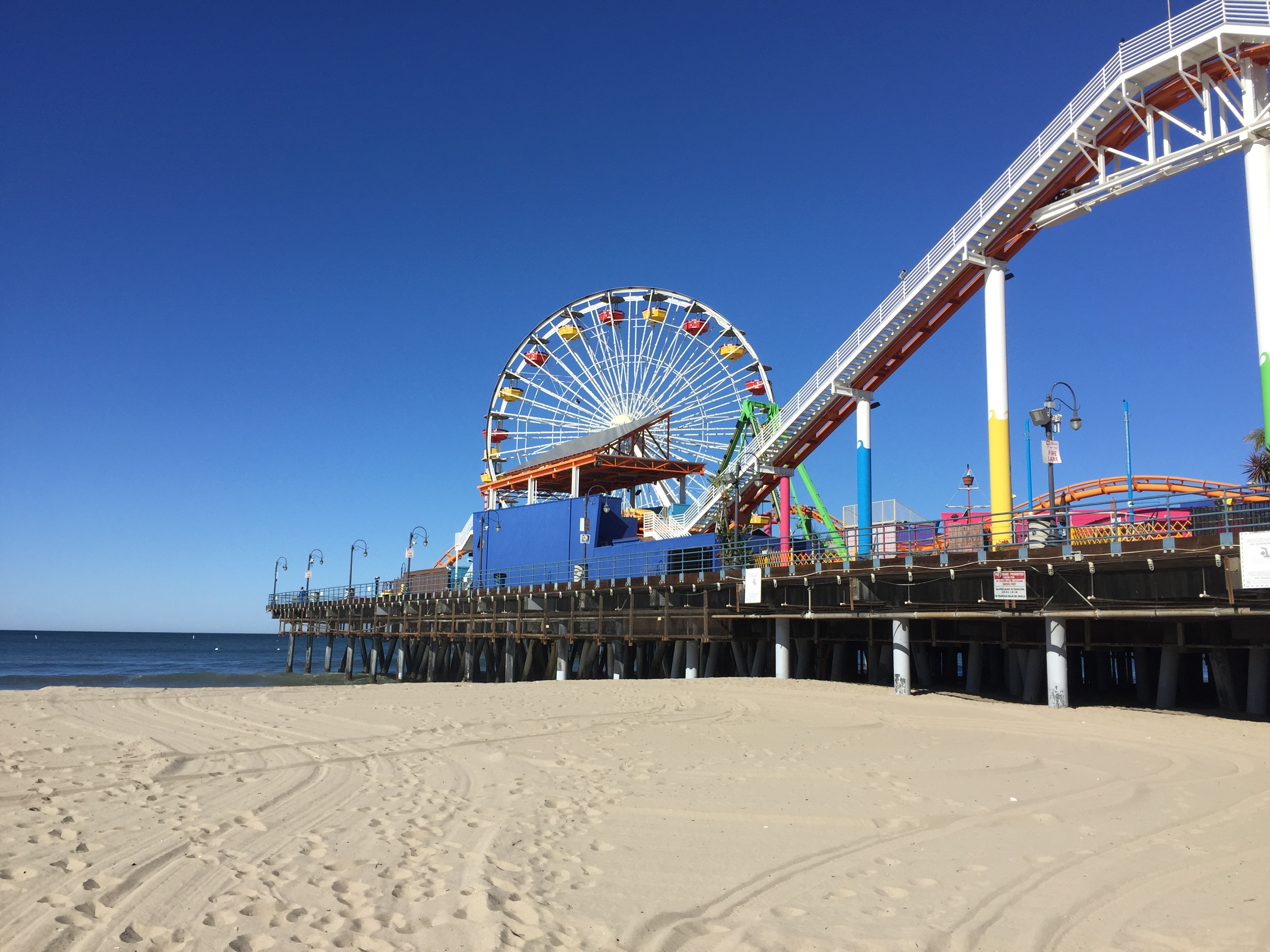 What to do on a sunny day? Skipping breakfast and going down to Santa Monic Pier – just had to take the geocache there. Before opening hours it is quiet. Only few people there. Nice waves at the beach. Nice and warm. With help of the app YELP! I found a good bicycle rental close to the pier. $7 an hour or $20 a day. Got an older, but ok bicycle and drove off towards Venice Beach. The beach is filling with people. Playing beach volleyball, surfing, using one of the skating facilities. A very nice bicycle path along the beach.

Quiet windy, but the tour of 4 km (each way) goes over very fast. Venice Beach seems much more hippi-touristy then Santa Monica. Alternative shops (would you like to have your need for medical Marijuana evaluated?), food and lots of people.

Found a place where the houses ar located along channels. Very nice. And very warm. Getting as much fluid into the system s possible. After a litte stroll along the street with all the shops, I drive back. Just about two hours biking was great.

Next of to chinatown. That means I have to take the bus and Metro again. Same prosedure as the last day. No limit for gaga people. 😉 Why does such a big city not have an more effective public transport system, that is independent from streets? They are building some (the line directly to Santa Monica opens in may… little late folks^^) but they should do much more.

Chinatown is small and not realy woth the trip. Nothing compared to Vancouver, San Francisco  or New York. So after half an hour I leave again to get to the highlight of the day – the Griffith Observatory. Ranked no. 2 on Tripadvisor as a must see destination, I read that the busses up there only operate on weekends. So I call an Uber and the driver takes me nearly to the top. The whole street up there is filled with cars. The direct street to the entrance is blocked and no parking possible. Have to walk the rest of the way. Crowded like nothing else. They say it should be nice at dusk, when you can see the lights of LA (you have a very good view over the whole city from up there) and even take a look through the telescope.

As much as selfie-sticks are kind of no-no it is nice to have one. 😉 So I can take pictures of me in front of the Hollywood sign that is best seen from the terraces there. Works quiet well. 🙂 Inside the big an stylish building are some exibitions about the universe and how things work. You can see a film for a fee of $7 – the entrance to the observatory is free otherwise. But they would show a film about the northern lights… THAT I can have for free a home. 😉

After some walking around, looking at the exhibition, taking pictures outside, I want to get down to the city again. And there is a bus there…. 50ct to get me half the way down the hill. I start walking until I have internet in the residential are and call a new Uber to get to the busstop to take the bus home again. The driver tells me, that it is so crowded because of Spring Break… that explaaines a lot. Why did I chose the bus again…. nearly 1 houre back to the hostel. Tired and with fresh band aids for my blisters (tomorrow I will choose other shoes) I get the first meal of the day at 8 pm. An Ok burger t the Third Street Promenade.

People out and performing. Should everyone there perform? – I have my doubts. 🙂  A long day is concluded. Tomorrow will be a travel day.