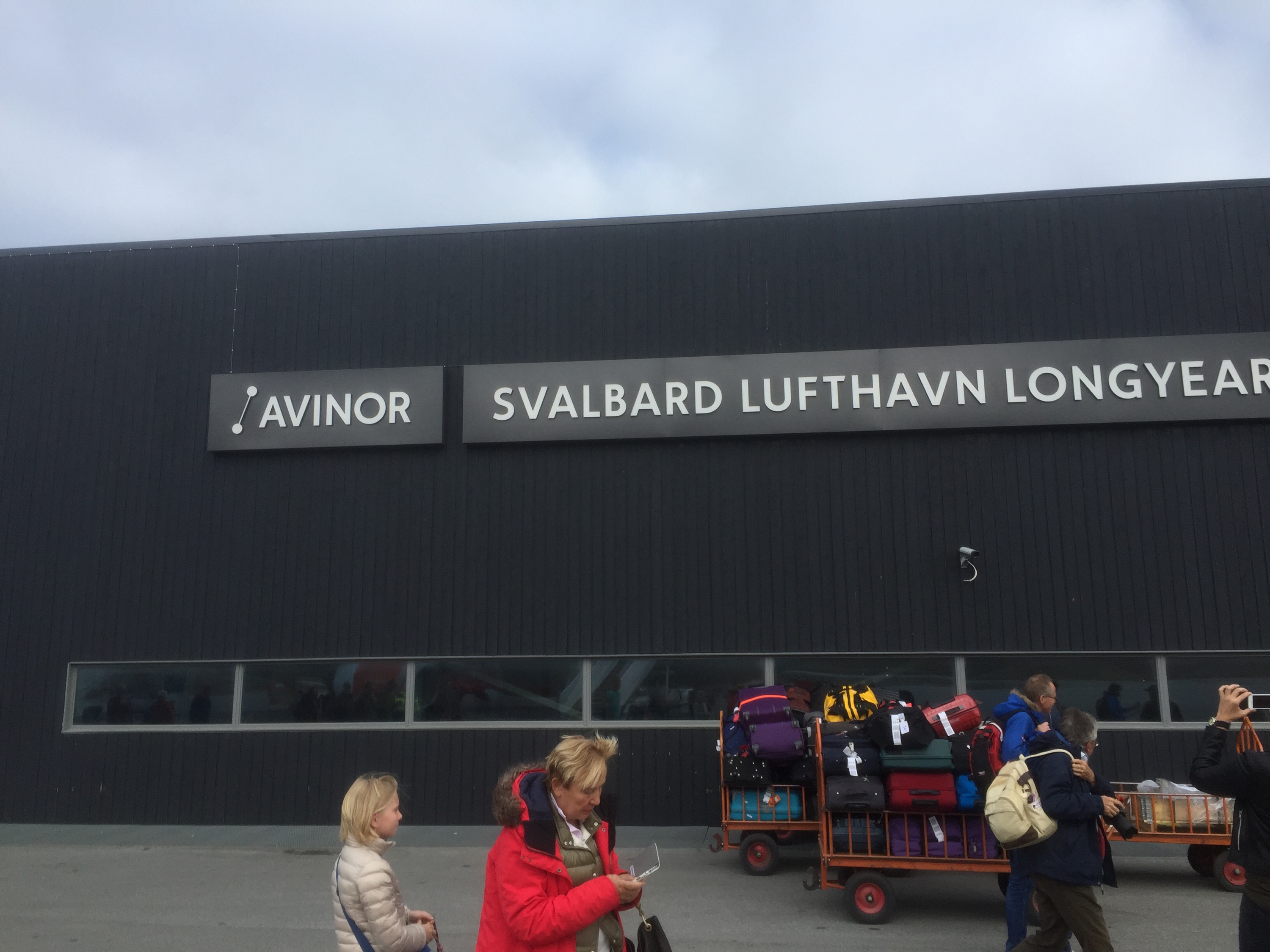 When you take a look on the map, look further north… no I mean FURTHER north. 🙂 78 degrees (and some minutes) latitude.

An early day up. First flight from Molde to Oslo at 6:55 am and then 9:30 from Oslo to Longyearbyen (the guy who foundet the place was named Longyear). No problems at all. Smooth flights and free breakfeast at the SAS Lounge in Oslo (Eurobonus Silver and August are good combinations). Full flight, all nationalities.

The weather is cloudy but dry – not like in Oslo where it was raining – brrrr. Mountains all around, no trees – and I havn’t seen a single Ursus maritimus yet. Only on signs – which I had to buy in a smaller version for my souvenier wall at home.

Longyearbyen is a very small place (2300 inhabitants) – but full of tourists. Planes and ships are leaving a lot of people here. Bus transfer to the hotel (Spitzbergen Hotel), a short distance from the town center. First odd thing – take off your shoes when entering any building in Longyearbyen. A nice collection of shoes, people eating in the restaurant in socks… Svalbard Hotel – before entering, take off your shoes (you get Crocs) or you can be a pussy and put plastic around your shoes… The museum is only good in socks. 😀 75 kroner and en interesting exhibition about the history of Longyearbyen and the flora and fauna on Svalbard. But no touching the Ursus maritimus. 🙂

Had a nice brownie and latte at a small cafe, did some shopping in the only supermarked (where you get everything you need) – of course some souveniers – the Ursus maritimus warning sign i a small version and some postcards for all the people down there on the continent. The local alcohol shop is very much cheaper than on coninental Norway – even than Duty free at the airport in Oslo ( ca. 30-40 %). So I had to buy a bottle of Absolut Kurant. 🙂 But I have to import it like from abroad. Svalbard is outside the Schengen area,so no taxes on stuff – but most food etc. has. to be brought long distance – that puts up the costs.

A nice walking tour to town and back, but my swimming was canceled – they have summer opening hours. I will try again on sunday. Very close to the hotel.

Dinner at the bar in the Hotel. Nice burger, unfortunately a little bit cold, but good taste. After preparing the postcards (don’t you ever forget anybody! – I have to buy two more…) andwriting this post I will pack for my boat trip to Pyramiden tomorrow. Camera, winter clothing, food, drinks (10 hour trip) – they collect me at the hotel at 8:30. That means early up again to get breakfeast.

Shot a reindeer frommy hotel room – only with my camera of course. But while goimg back from town to the hotel I met two guys with rifles on their back… They might have come back from outside the safe area (which is marked on the loval town map – outside you should habe a rifle or sit in a car).

Hoping for good weather and maybe some Walrus on the way. I will report.
PS: I will provide photos and links as soon as I have them and a regular PC – difficult with my iPad. Same for editing spelling mistakes (@Hagen :P).