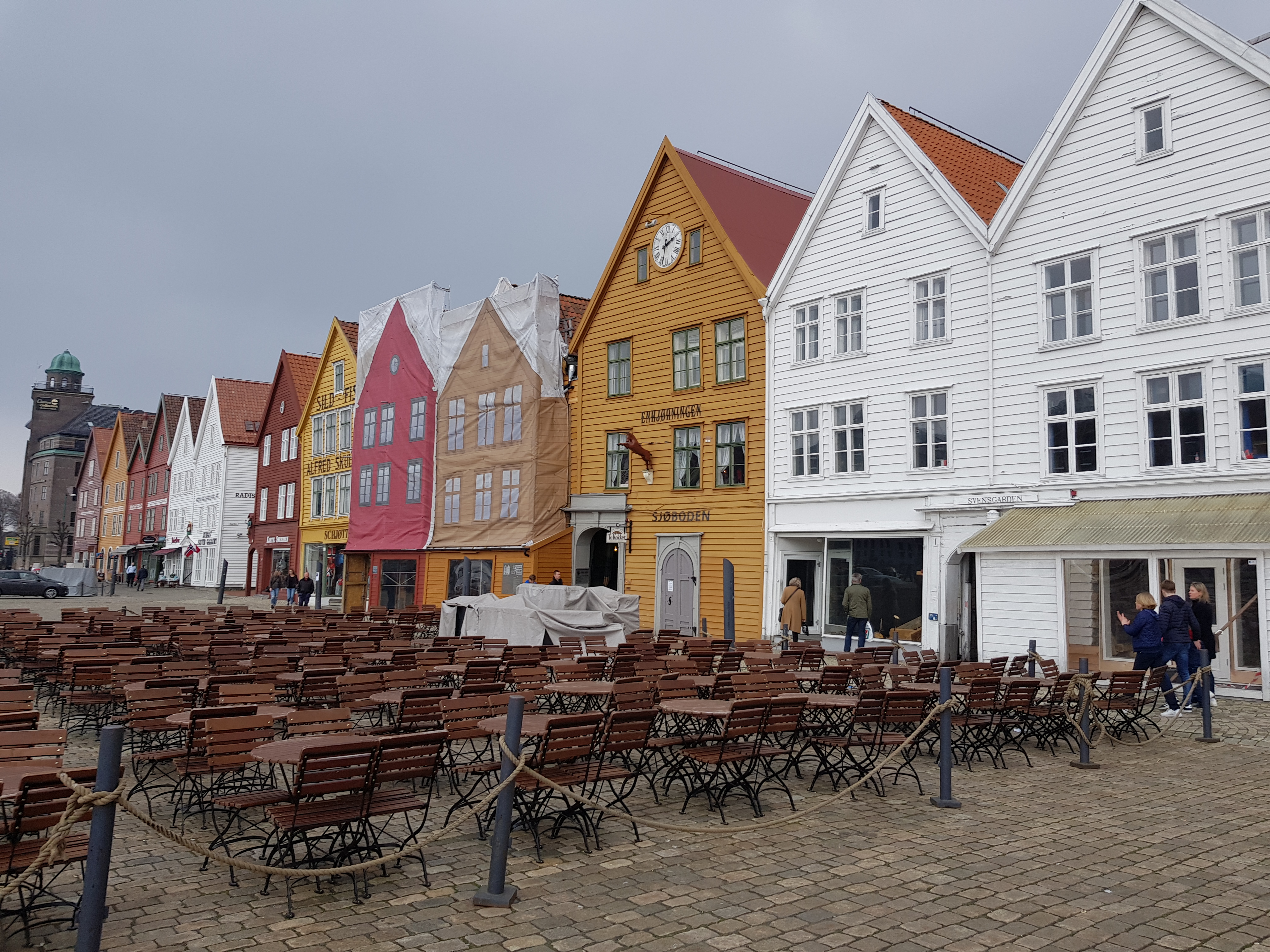 Only at home for 1 1/2 days and off I go again. But this time it is only partly my fault. Let’s summon up how this happened and rewind to December 2017 (shortened version):

Simon: Wanna see Jimmy Carr live in Ålesund on Saturday, 21st April?
Me: Sure!
Simon: It is sold out, but there are tickets for Bergen the day before Friday 20th.
Me: Mmh, but I will just have come back from New Zealand and then taking another day off at once? I don’t know!
Simon: To late, I bought two tickets.

So an early ferry again to get picked up for the ride to Ålesund airport Vigra, where our SAS flight will leave directly to Bergen. The airport could need a little makeover, it is a little bit outdated. We are a little bit early.

Boarding the small CRJ-900 plane for the 40 minutes flight. Coffee/tea served complimentary, but the cart with the snacks we could buy never got to us. Not enough time. Bergen has a very nice new terminal. I only know the old one which was in dire need of upgrading. The fastest way to get to the city center is by bus, but we chose the slower, cheaper way by the light railway. Very convenient mode of transport.

Last stop is exactly where we want to go – Byparken. Just a small walk from the stop. Our hotel is Scandic Byparken in the city center. Walking distance to Bryggen and only 3 minutes from the scene for tonight’s show. After a fast check in our luggage is put into our room and we are out to take a walk around town.

This was originally not planned as a trip for a whole weekend (Friday down, Saturday up), but taking a flight on Sunday afternoon and paying one more night for the hotel was cheaper for each of us than flying back on Saturday (not taking into account food, activities etc.^^).

Walking to Bryggen, the world cultural heritage site from the times the Hanse had control over trade in Bergen. Beautiful wooden houses that give you an impression of old times. Been here several times before, but like it every time.

Time for a late lunch/early dinner. We chose a restaurant Simon has been to before (Bryggeloftet & Stuene) and eat the dish of the day, which is venison. Very delicious. Just the local Altbier I have costs as much as a whole beer crate in Germany. Beware of Norwegian prices. But I liked it (and I am not a beer drinker).

We do some more walking through the center of Bergen and make our way back to the hotel for a small break and change of clothes before we go to Grieghallen, which is just down the street. Last time I was here, was at a conference. About 1600 people fit into the main auditorium and every seat is packed.

I cannot repeat everything Jimmy Carr said, but we had a blast. Laughing so hard sometimes. He is just political incorrect great. And even getting into some local politics. 90 minutes pass to fast, I could have sat there for an hour more.

Plan for the night is to find a pus to get some beer and enjoy the evening. Just keep away from Scruffy Murphy’s at the fish market. First this should be an Irish Pub but there was nothing that made you think of it. Second we both hat the nachos with minced meat. As I had all my salsa and sour cream on the food I didn’t recognize the funny taste of the meat Simon mentioned to me while eating. He left parts uneaten.

Back to the hotel as we couldn’t find a better place to go. Let’s say that food poisoning is not fun and I got very lucky with my horse stomach. Not a good night!