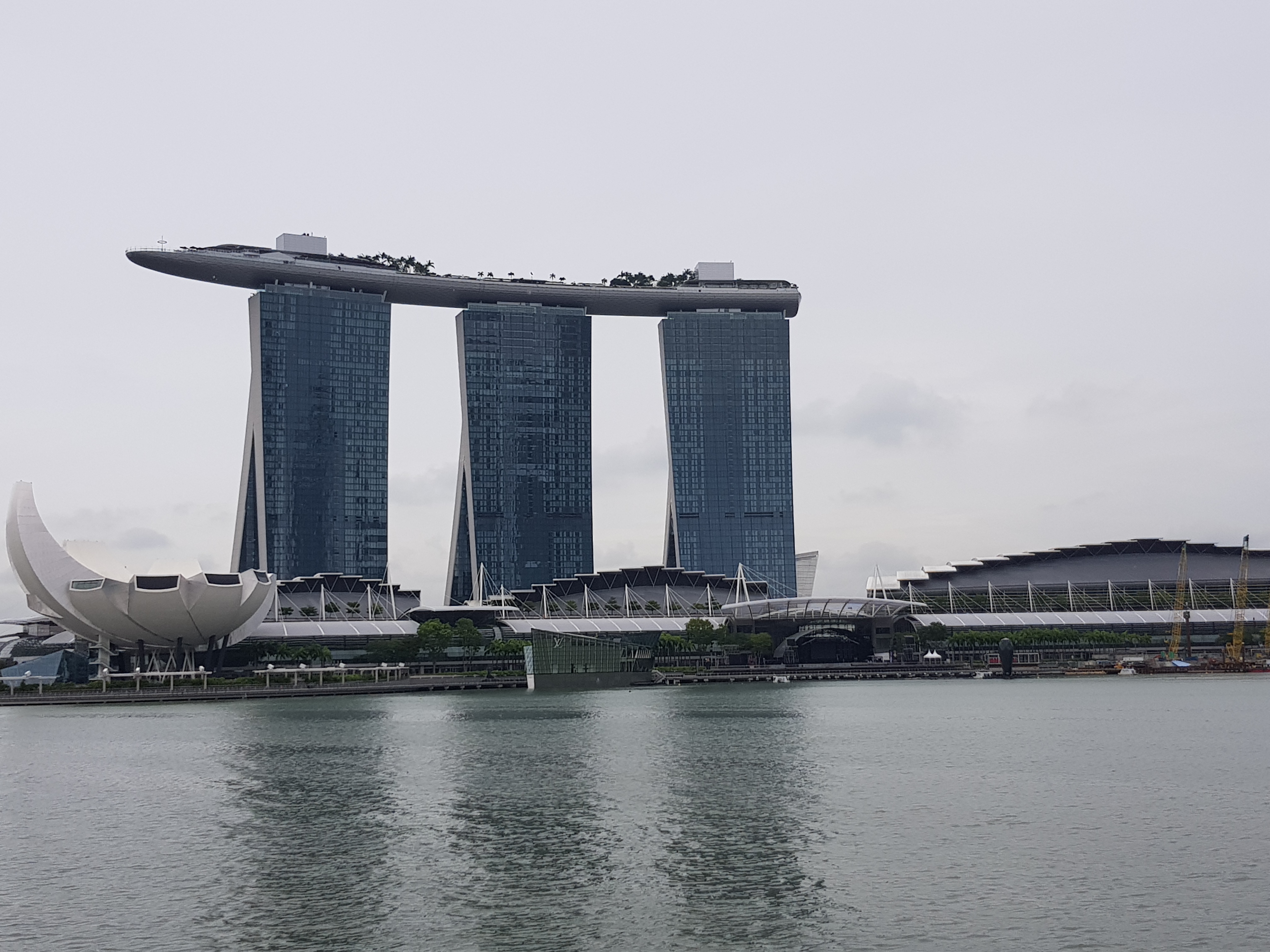 We landed in Singapore at 4:00 in the morning. The thermometer is already at terrible 27 degree C and it is said go get warmer over the day. The weather forecast also say that there is a high possibility for rain and thunderstorms. Sounds great.

After finishing immigration (I was the only one at the checkpoint) with a death thread on the immigration card (drugs will get you hanged) I am out in the arrival hall. First thing again is organizing a SIM card for my mobile phone. They offer a tourist card with 100(!) GB data, international calls and texting for only 15 Singapore dollars (about 10 Euro). That is really cheap. I want to get my luggage into storage (better then carrying around everything for a day) but while packing my day pack I realize that I forgot my BOSE headset on the plane. Nice start in the day. After some inquiries I find out that I ave to go to the lost and found office inside the security area.  This means reentering the security area, including a new search, paperwork, giving my passport away and getting a new paper.

But after I am inside I directly go to the office and there is my headset lying in the shelf. Got lucky and Singapore Airlines worked fast. Just more papers, a signature and back to the security guard, delivering the visitor card, getting back my passport and now I can explore Singapore. Where to go first. It is still very early in the morning. As I am collecting countries for geocaching and I come prepared with a GPS with the geocaches of the area I planned to check the possibility to cross the boarder to Malaysia and find at least one geocache. That means a ride on the underground for about 3 Euro to City hall and then change to the line that stops at Woodlands. The ride on the underground is a chance for a quick call home. Nice with air condition on the underground.

At Woodlands I have to take the bus for another 2 Euros that will take me to the border Checkpoint. There I have to get off the bus, enter the building, do the emigration stuff (present passport, fingerprints taken, stamp in the passport) and go out to take the next bus to the other side of the bridge to the checkpoint at the Malaysian border. Again passport control, fingerprints and a quick stamp and you are in. Now you could take the bus further to the city center, but I just want to get the geocache close to the border. The weather is hot and humid and I am sweating in my cotton t-shirt. How o get to the cache?

There doesn’t seem to be a possibility to walk from the checkpoint so I follow the people that also are on foot. I never before walked on a highway. But a lot of people are doing it and there are even people parking there and one or two selling food out of the car (we are on a highway to the border – just to get that clear). My GPS shows me a route that includes a 3 km walk to the cache. That will be a warm walk and even if I have had some sleep on the plane, my inner clock is not in sync with my surroundings. It feels like a long walk. The buildings I pass are not something we would call nice by western standards, there is no real sidewalk and the few parts that are there are i bad condition. But I am getting close to the cache and when I arrive I feel like I need a bucket of water. A very quick log of the cache and because of the heat I decide that I will return to Singapore. Now my GPS says it is only 900 meter of walking to the boarder.

Seem like the walking connection from the border is through the main train station at the border. Had I known… Walking back and trying to buy something to drink inside the station. But the card terminal is not working and i don’t have any Malaysian currency. I offer Singapore dollar, but they don’t take that. The KFC manager gives me the drink without payment. A very kind gesture.

Leaving Malaysia is as uncomplicated as entering. The bus is waiting downstairs and then you are stuck in a traffic jam on the bridge to Singapore. Takes about 20 minutes for the short distance before I have to leave the bus again to the Singapore immigration checkpoint. A longer procedure. They are strict on immigration especially for people from some countries as i read on the internet. And some people don’t know how to handle immigration and start discussions. Takes some time until it is my turn. All the questions about what I am doing in Singapore, when I am leaving, where I am leaving to, what I will do there – I had all tickets and answers ready and the guard seemed satisfied so I get my 2nd immigration stamp to Singapore in one day.

Just the next bus to the next underground station to get to the city center (City hall). On exiting the underground, it has started to rain. Not cooling down the air, but it is still very humid. I walk around a lot, finding my geocaches for Singapore and try to find some of the things one should see. But after an early arrival and because I have been walking around for some time now I feel that I am getting tired and my wet shirt doesn’t help feeling good. After finding some of the landmarks I think a bus tour through the city would be nice. That project is stopped after 3 bus companies that stop where I am don’t accept card payment on the bus (or anywhere else) and there is no ATM close by to get some cash. Very frustrating and after more walking I make the decision to go back to the airport even with some hours to spare. I feel very tired. The MTR takes me back to the Airport in 30 minutes.

I get my stored luggage and then go to security control and emigration. A sign clearly stats that you cannot get out again as unnecessary entering/leaving the airport is legally not permitted. Good with me. Inside the airport I take a direct route towards the Singapore Airline lounge. The first thing after I am inside is to go directly to the showers. Great big showers for travelers with fresh towels, toiletry and everything you might need. Fantastic to get clean after the day out. I knew the climate would be hell for me, so I have brought a set of clothes to change in my hand luggage.

Asia is now removed from my travel list – the Asian climate and i are not compatible AT ALL!

Sitting down and then checking the buffet which has a good variety of food (to much fish for my taste^^) and drinks. Just sitting, relaxing, reading. Here i spent a few hours. Before going to my gate I explore the airport a little bit more (I had to move, otherwise I would have fallen asleep), taking the trains between the terminals, walking around and using the other lounge loser to my gate to work a little bit on the PC.

Then it is time to get to my gate to catch my Turkish Airlines flight to Istanbul. Getting closer to home.