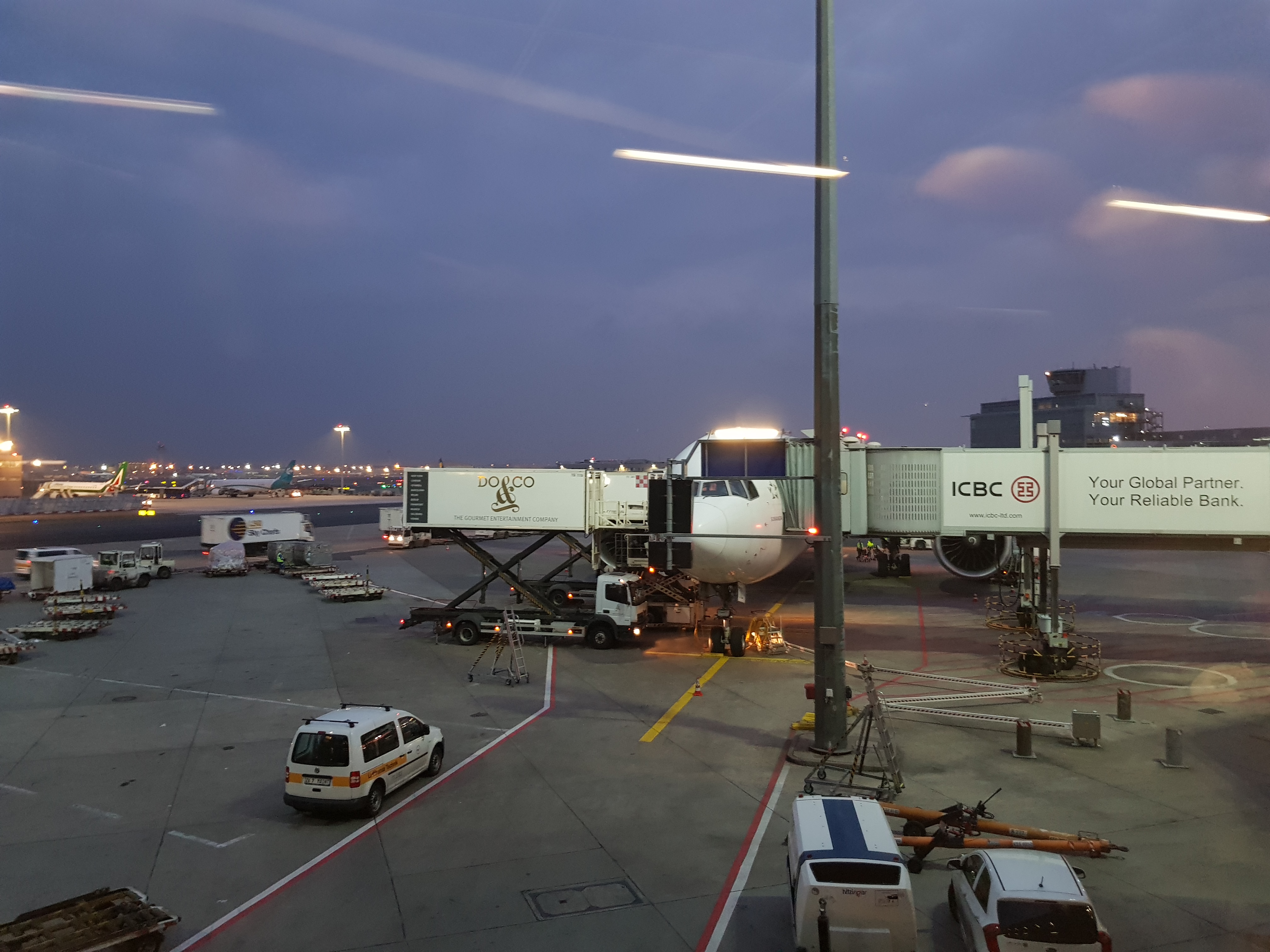 When arriving in Frankfurt at the airport, my next flight was already 45 minutes late. That makes a waiting time of about 7 hours. And I don’t want to exit the airport and go to Frankfurt. It is cold outside. 🙂

As mentioned before, I went for the lounge alternative. A little bit of chilling, some music and snacks. But the waiting time feels long. Anyway – you have to be at the gate in time for the normal departure. When arriving there, my Flightradar App tells me that my plane has just landed. Great. Now we just have to wait some more. I gothte B777-300ER that I wanted. The one with the new business class. 🙂 Got lucky today. 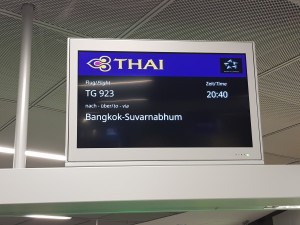 Seemed to be a medical emergency on board. Ambulance at the plane. After some more waiting Business class and all other VIP persons are allowed to board. I am welcomed with a smile and the traditional Thai greeting. My seat today (and tomorrow on the next flight) is 12K. A window seat with a full bed. A lot of legroom and a real seat belt like in a car.

As soon as I sat down a friendly woman came and asked for my drink order. Champagne – when do I get this otherwise?! And the went around while preparing for departure to get the drink order for after take off. Efficient!

All stuff I need for the flight is in pace. GoPro on the window, headset in place (the Thai Airway ones are not as good), mobile, charger. Perfect.

Takeoff smooth and as soon as the set belt sign is switched off, the personal is coming with the ordered drinks. And some roasted nuts. The next is the order for dinner service. I decided to take the Thai option with stir fried pork and some other stuff.

Starter arrives and I even tried the prawn (that tasted like nothing… no taste at all). Some ham, parmesan cheese, olives, tomato-eggplant salad and bread.

Main course looks great. But I saw on YouTube that some things can be spicy so i just dipped the tip of my fork in the sauce and tasted it… which ended in an order for a glass of water because my mouth was burning and my eyes watering. Thai food is complex. Spicy, sweet, sour… The pork was spicy, but not to spicy. You could taste lemongrass and ginger, a nice soup, steamed rice. Yummy. Some cheese, grapes and crackers after that.

For dessert you had 2 choices. I chose to take both and got an egg custard with pumpkin and chocolate mousse. Fantastic. To the meal I had a great glass of white wine and water.

After dinner service the order for the breakfast service was taken and I tried to watch a film, but got tired. When trying to make my bed, the staff came to make it for me – I like business class. A nice blanket, a pillow (two after I asked for an extra one) but I had problems to find a position to sleep in. It is not very comfy for me (other sleep everywhere).

I went into a rotating sleep-like state but after two hours we got into a turbulence area that was shaking the plane more than normal. After the worst shaking was over I put my seat back in a position, where my legs were lying flat, but my back and head was a little bit up. That was better and I managed two more hours of pseudo sleep.

2 hours before landing I got back in a sitting position and was asked if I wanted a drink (OJ) and if they could serve me breakfast. Oh yes they could. The continental breakfast was some nice yogurt, butter, jam and some rolls. Not the best breakfast. The rolls were dry and baked to long. The yogurt was OK. Nice with some fresh fruit.

I had time to get my hand luggage fixed for my trip to Bangkok. All batteries had been charged over night. I definitely have to much stuff with me. 🙂 Landing in Bangkok on time (we needed only 9h 45min). Outside temperature 30 degrees C and humidity like hell. The one thing I hate most.

Now is the beginning of day three. Keep reading. 🙂

One thought on “New Zealand – Day 2 – Frankfurt to Bangkok”