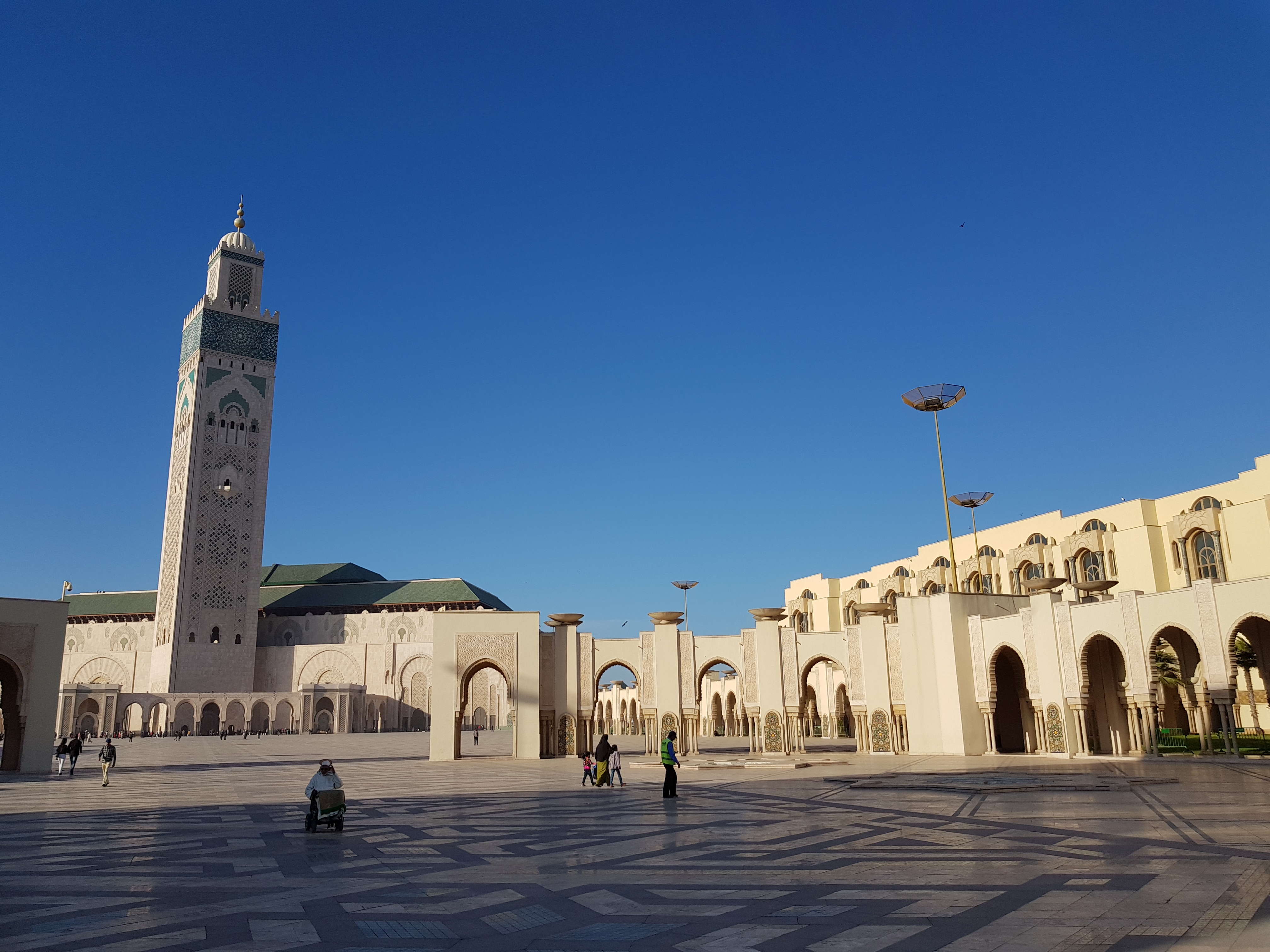 Rise and shine. Today another day-trip to another part of Morocco. I got a 1st class ticket for the train to Casablanca. Standard breakfast at the hotel and then the 10 minute walk to the station. I am a little bit to early for my 8:20 train. Have a little bit over 40 minutes until the train leaves. It is not there yet. Ticket check before you can enter the platform. Queuing i my favorite hobby… not. The train that is pushed to the platform does not look very new. As soon as it stops, the people swarm towards the wagons. Time to stay back, that is why I booked 1st class. Compared to Europe extreme cheap and I know I have a seat.

I got a seat in a compartment and of course I will drive backwards. All the other travelers ar French. So no chance to understand anything they talk about. I put on my Bose QC35 headset and listen to my audiobooks, while the landscape travels past the window. Ok, landscape is maybe to much… desert, som farms, not much to see, but interesting anyway. Totally different from the area I come from.

Traveling in first class means that the seats are quiet comfy, the snack car comes to us several times, the air condition works, but the cars are old. When you go to the toilet it is a little bit messy and when you open the lid, you can see the rails down below passing by. Not a good idea to use the toilet in a station. 🙂

After over three hours I arrive in Casablanca. The station is small and needs an upgrade. But I watch at it from my European point of view. A beeline out of the station to find a nice, clean toilet and after I passed the myriads of taxidrivers that want to take me to places (and vocally are very open about it) I get into a nice hotel and the rest of the day may come.

Casablanca is not a turist city. It is the financial center of Morocco.  That is what you get. “Modern” office buildings around the station area paired with the old looking, not up to date houses I saw in the other cities, too. Because I didn’t find something that would interest me from a tourist point of view, I planned to take the new, modern tram to the beach and let my geocaching app guide me through the city. A 45 minute ride in very nice trams. And very cheap. And much better than the busses I saw that day in the city. I am talking about the busses with the missing windshields and windows and the damaged or missing doors – and they didn’t look very safe. Marrakesh has much better busses. Taking the tram gives you a good first impression of the city. A big city center with all the shops, public buildings and some building activity. Closer to the beach they ar building condos that look expensive on the signs. At the terminus it is only 100 meters to the “beach”.

I have never seen a beach that dirty. Nothing nice at all. A soon as I got down to the sand I was approached by a guy on a horse “Want to take a photo with the horse?” – NO! If I want to take a photo with a horse I can do it anywhere and don’t have to travel so far. The geocache that is located here is a fast find. After a quick burger at KFC (never seen such an unorganized restaurant) I take the tram back towards the city.

My next geocache is located at the Place Mohamed V. Directly in front of the courthouse and city hall with all the cameras and soldiers patrolling. Not a problem. A short sit down, a hand movement and it is logged. Now I have a mystery that I can do, and it looks more like a multi cache. I have to start at the Mosquée Hassan II, which is a ca. 3 km walk (between 30 and 40 minutes).

After some walking through the more poor areas of the city (as it seems) and crossing many typical Moroccan streets, I arrive at the starting point for the cache. Some pictures of the impressing structure directly at the shore.

I walk along the coast to the northeast. Next stop is Ricks Cafe which is known from the Academy award winning movie from the 1940s. Not the original one, but a replica build based on the film. High prices there and it is closed today. So no way of checking if it is like in the movie. The clue here takes me to the last stop, which is a restaurant. Again a very common way to hide caches here. Tourists place them in shops/restaurants. The head waiter shows me the cache and a quick TravelBug exchange is made.

Back to the city through the old Medina. Smaller then in Marrakesh, same stuff you can buy, less irritating sellers. My last cache for the day is close to the old clock tower under a bench. But there is a younger woman sitting on top of the cache. I sit down hoping that she will soon move. Nope… not my lucky day. Snapshatting, writing SMS and and and… not moving at all. I call my parents taking very loud in hope of that she will get enough… nothing. Loud classical music from YouTube – again no luck. After 20 minutes I have to give up because I have to go back to the station.

Next problem getting a tram ticket. They don’t take card payment at the ticket machine, I only have 100 Dirham and no coins and there are 6 cues. Have to stand in line twice (once before and once after I got my money changed). Then you have to get into the tram that is packed like the Metro in Japan. All the people come out at night. You cannot avoid close contact to a lot of people. But soon I arrive at the station. A quick shop for snacks for the journey home (no time for real food) and onto the platform.

It is dark (bad lights) and a lot of people are waiting. Announcement is made in Arabic and French which I didn’t understand, but an old man told me in very basic English that “Train delayed 30 minute!”. ok… no problem. The signs change to 40, then 50 minutes. Then the train arrives – jippieh. To the first class car just to be stopped by the conductor (me and 4 other people of different backgrounds). Bad English but it should be the wrong train, because it is a delayed train. We know, we booked it. No, no way to get in, the next train is our train and will arrive in 60 minutes. No, THIS is our train. 10 Minutes of discussion later the train leaves without us. We try the station manager on the platform and a Moroccan woman telle him in Arabic, me in English what has happened. He checks our tickets, makes two calls and becomes mad. That was our train and the conductor is a Son of a Camel (my interpretation). He takes all our tickets and changes them with stamp and everything. Thanks to the delay we don’t have to wait that long and this train is 20 minutes early. And the conductor doen’s want to let us inn because the ticket was for the train before…. but the station employee talks to him and we jump into the car and sit down. YES!

An uneventful ride home, just 2 hours after I planned to be home. A midnight burger at McDonald’s in the station and then I am lazy and try a taxi to the hotel. 50 Dirham? No way… 20 (the normal price). When I leave he accepts and I get into the taxi, where there are already passengers waiting. He knows how to make money. A long and eventful day ends. My last whole day will be tomorrow.