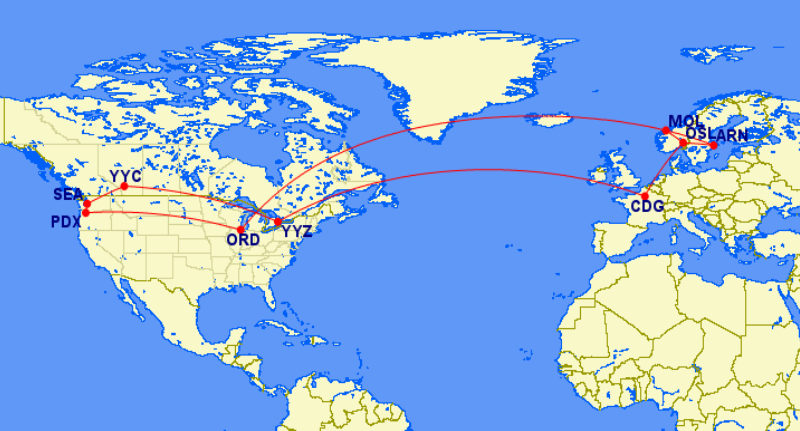 I know it is early… but I found some nice award flights an couldn’t hold back.

As of today, my main holidays for 2019 are booked with one small “maybe”. It is an Easter holiday again. Best value for money/holidays. It will include stays in Paris, Calgary (Canada), Seattle, Portland and Chicago (all USA). But let’s take a look at the map… The routing is quite nice.

It starts with 2 SAS Economy Plus flight from Molde to Oslo and to Paris where I have an 16 hour overlay. I booked a cheap hotel close to the airport, but think I can take a little trip to the city in the evening. The next morning I will board an Air Canada flight in business class to Toronto and after that another Air Canada flight to Calgary.

In Calgary I hope to meet a geocacher I met in Marrakesh last November, but I also want to see the city and the area around in the province of Alberta. The overall planned stay is 4 nights. I already booked a nice little apartment on AirBnB til a great price.

Next stop will be Seattle. Not only the geocaching headquarters in the city, but I heard a lot of good stuff. So I want to see it with my own eyes. 🙂 Again 4 night stay here. At the HI Hostel downtown. A singel room with a good location.

The next stop is not really decided. I thought about Portland (Oregon), but am not sure. I might find out that there are other places that are more interesting. 🙂 This will be planned further as the holidays come closer.

The last stop on my trip i decided. It will be the windy city – or Chicago as most people call it. 🙂 I found a nice (affordable!) private room in a hostel close to the city center. Been in the city once before in 2011, but there was not much time to explore in a group. That will be better now. 5 nights I have planned here (maybe i add 3-4 new states to my Geocaching statistic while exploring the area).

For the trip back I finally can check out the SAS business class on the trip from Chicago O’Hare to Stockholm. Ca. 9 hours to test and enjoy everything. The last to flights are  from Stockholm to Oslo and Molde on SAS Economy Plus.

But as I mentioned… Portland is the only thing that still has to be thought about. Over all, the tour from Molde to Calgary and from Chicago to Molde costs me 110.000 Eurobonus points and about 200 € in taxes and fees. That is not a bad deal. 🙂 Domestic flights will add a little bit, but not much. And some new airlines, airports and film material for my YouTube channel…

Looking very much forward to this trip.