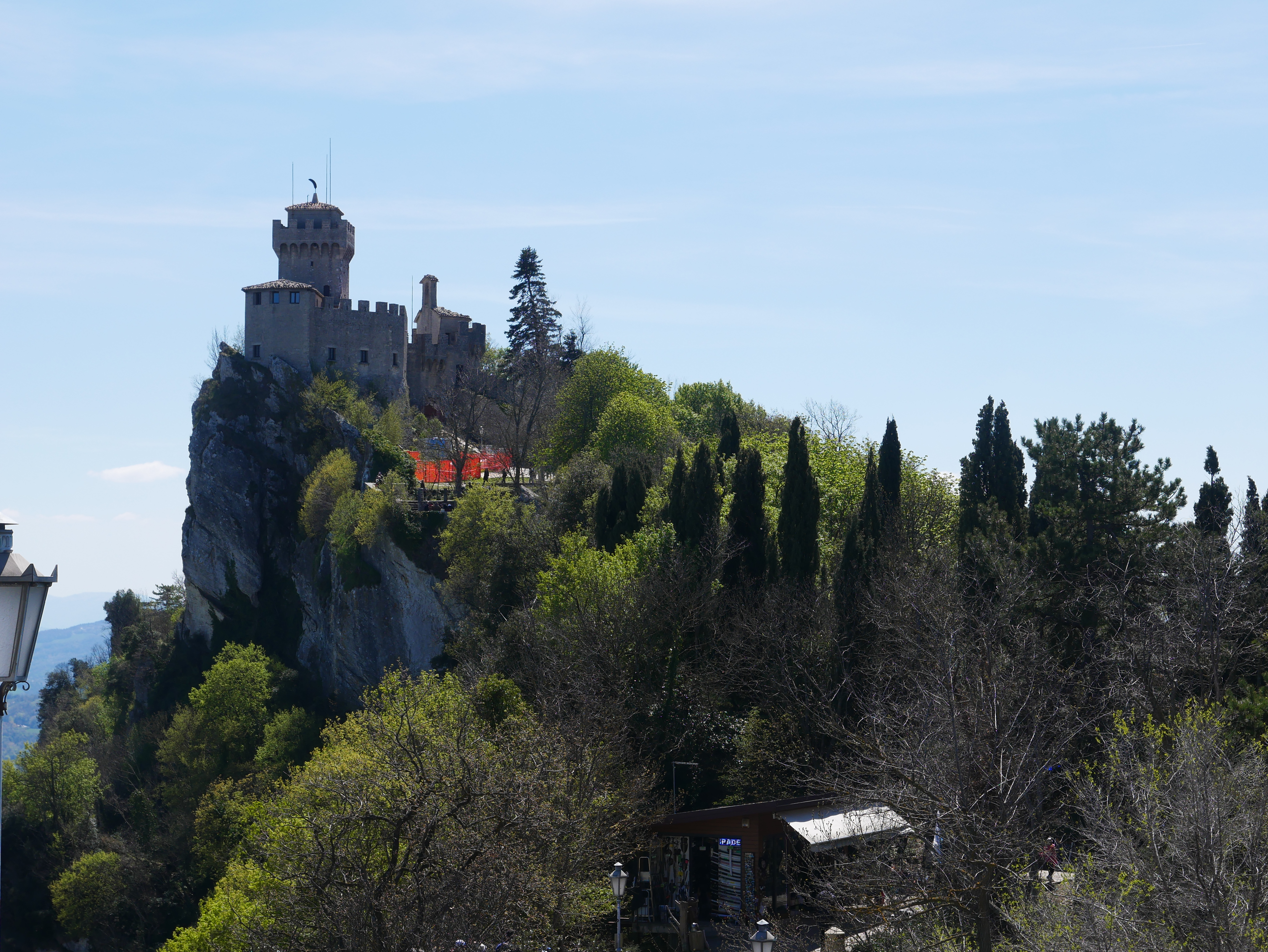 An early alarm. I did get a train ticket to Rimini early in the morning. I want to visit San Marino. The small republic, UNESCO World heritage and a country missing on my list for geocaches. Many reasons to get there. It is a 90 minutes ride from Bologna plus a bus ride of 45 minutes and to make the most out of the day I want to have as much time as possible.

Since I didn’t buy breakfast all I have to do is to get showered, pack my stuff for the day (all batteries loaded!) and cross the street to the station. This is why I chose the hotel. It is directly at the station. No early taxi drive or anything to get there.

A quick breakfast bit at the café in the station building. The train is arriving on time. But I didn’t calculate that on Easter Monday – which is today – combined with perfect weather, every Italian is going to the beach. The train is full. Really full. No place to sit to find. People standing everywhere and sitting on the stairs. But I won’t stand the whole time. I find a corner where people normally put luggage. I define myself as a piece of luggage now. 😀 Comfy is something else, but better than standing. At least I can read and listen to audiobooks here.

After 90 minutes, without the possibility of enjoying the landscape the train arrives in Rimini. I should have some time before the bus leaves and I found out, where to buy tickets. Unfortunately, i didn’t go as well as I planned. First the lady told me, that they don’t have any tickets any more and I have to get them in the bus and that the bus leaves in two hours. WAIT! 2(!) hours? I checked the schedule and the bus should leave in 30 minutes… A trip to the bus stop and there is the confirmation… The company has a special timetable for holidays like today and cut out two busses. They just didn’t load that information on their homepage.

This is a catastrophy, since I don’t have all the time I want to visit San Marino. And what is the alternative? Normal bus services? Nope… nothing goes there. Rental car? Nope… all closed on Easter Monday.

Last chance: a taxi. But that will cost some money. I checked the Internet and there is no other transfer. After some back and forth discussion between me and my bank card I ask a taxi driver, how much the trip is. 50 Euro. That is 8 times what the bus would cost. But OK. The only way to get there and this is once in a lifetime. So I accept, put on my mask and off he goes. Still mask mandate in Italy.

To say that driving in Italy is special is an understatement. It feels save, but lines are decoration and speed limits are just a suggestion. But all of this is part of the experience. 😀 The ride is OK and after some time we cross the border to San Marino (which is a sign with “Welcome to San Marion”) and drive through the modern part of the state. The wat up to the old town has many swings, a little bit like Trollstigen in Norway, but longer lasting and in a city. It goes up and up. Tons of cars. I am not the only one with the idea to get here.

And now I have to say that the taxi was the best choice here. Because only local license plates and taxis can pass the police officers trying to solve the traffic jam. With a rental car I would have had problems. I would have ended up on one of the parking lots, which all are full. The Taxi just kept going, passing two more control point where cars were send the other way. The driver puts me directly in front of the city gate to the old town. He even shows me, where to get a taxi back. Now it is time to explore San Marino.

First impression: Great old town, old buildings and lots and lots of tourists. Old towns have narrow streets and they are filled with people. Public holiday… I should have thought about that. 😀 Anyway… I am following the streets to get to a point where I can get a view. I see something else: shops and shops with crap. Tourist traps with all kinds of glasses, postcards and stuff that has nothing to do with the city. But it sells. Even to me. I always get a magnet and something for my travel wall if it was a special place I visited.

The view is great. I will not go into details, old towns with castles are known. Of course I have to visit a museum and go into one of the towers. The lady at the entrance wants to have 12 Euros for 2 Museums and I thought the price was normal. Until she looked and found out I am alone and only wanted 1 ticket. So it should have been 6 Euros. She is very apologetic and gets help to cancel my payment and t get the right amount. With Norwegian prices in mind, I wouldn’t have felt the difference.

Again nice views, a lot about the cities history, a viewing point where you had to cue to get up a tower… I hopped over that one because there was much waiting involved and it was a tight space. Best to continue the walk, get something to drink and do a geocache (country done) and an adventure lab.

This Adventure lap sends me o all three towers of San Marino. Again I thing geocaching is a great way to explore a city. From one overpopulated end to the other, where there are not that many people. It is a little walk and not everybody seems to be up to it. In the distance you can see Rimini and the Adriatic sea.

A very nice city, if you ignore the terrible shops. I have another museum and I go to the main square where the parliament is. That is my second museum. Interesting building. A movie about how the system in this small republic works and you can go into the heart of the parliament. Not big but again a lot of information.

I have been walking around a lot and I thought I should calm it down after Stockholm. No chance. I would like to eat something, but everything is full. So it is – you guessed right – more walking, more sightseeing, buying some San Marino Euros for a friend in Norway (yes, buying money..).

With the return in my head and the fact that I have to find a taxi it is time to get back to the city gate. All taxis are gone. You have to call a number and they send you a taxi. Remember, that 10 minutes in Italy/San Marino means 20 minutes. I get my taxi and the return drive will be 60 Euro. And I don’t even care. 😀 All part of the experience. But his card terminal does not work (I suppose the money will be put to use without the government knowing about it ^^). SO We have to stop at a bank on the way.

This is driving from another planet. Speed limit not existent. Ypu pass cars left, right and on the wrong side of the road (and 80 km/h in the city center is new for me). We stop at the bank, I get the money and we go back to the street, convenient driving on the footpath, since it is faster. I survived the ride, payed but never got my “I survived…” T-Shirt. 😀

Some more time to kill in Rimini. A quick burger at the local Burger King (very Italian^^) – where I had to show my vaccination passport to be able to sit. And then One of my favorite things on holiday: Grab an e-scooter and go through the streets geocaching. Not to bad the area.

And as soon as I am back, hop over to another to get to the beach. Rimini is a summer and beach destination. Following the flow. To make it short. I don’t want to be here in summer. The beach is big and organized in sections which are managed by several companies. It must me like fish in a can in summer. Even today there are many people.

So best to get back (on e-scooter of course) to get to the station.

I am a little bit early and see the earlier train leaving. I think I ended up in India. They had to push people into the cars. WTF???? Good luck for me.

My train arrives and I get in and it is full. I have to stand in the middle. But I am a rebel and want to sit. So the floor it is. In the middle of the train I sit down for the 90 minutes ride. Again the most uncomfortable place but after some time, two others copy me. For the last 20 minutes of the ride I get a seat. Soooooo nice…

Back to the hotel in Bologna, putting away my stuff, recharging batteries and getting food from the small shop downstairs. A fresh pizza slice which tasted very good and was not to expensive. Feeling my legs after a full day of action it is soon lights out. Rome next.