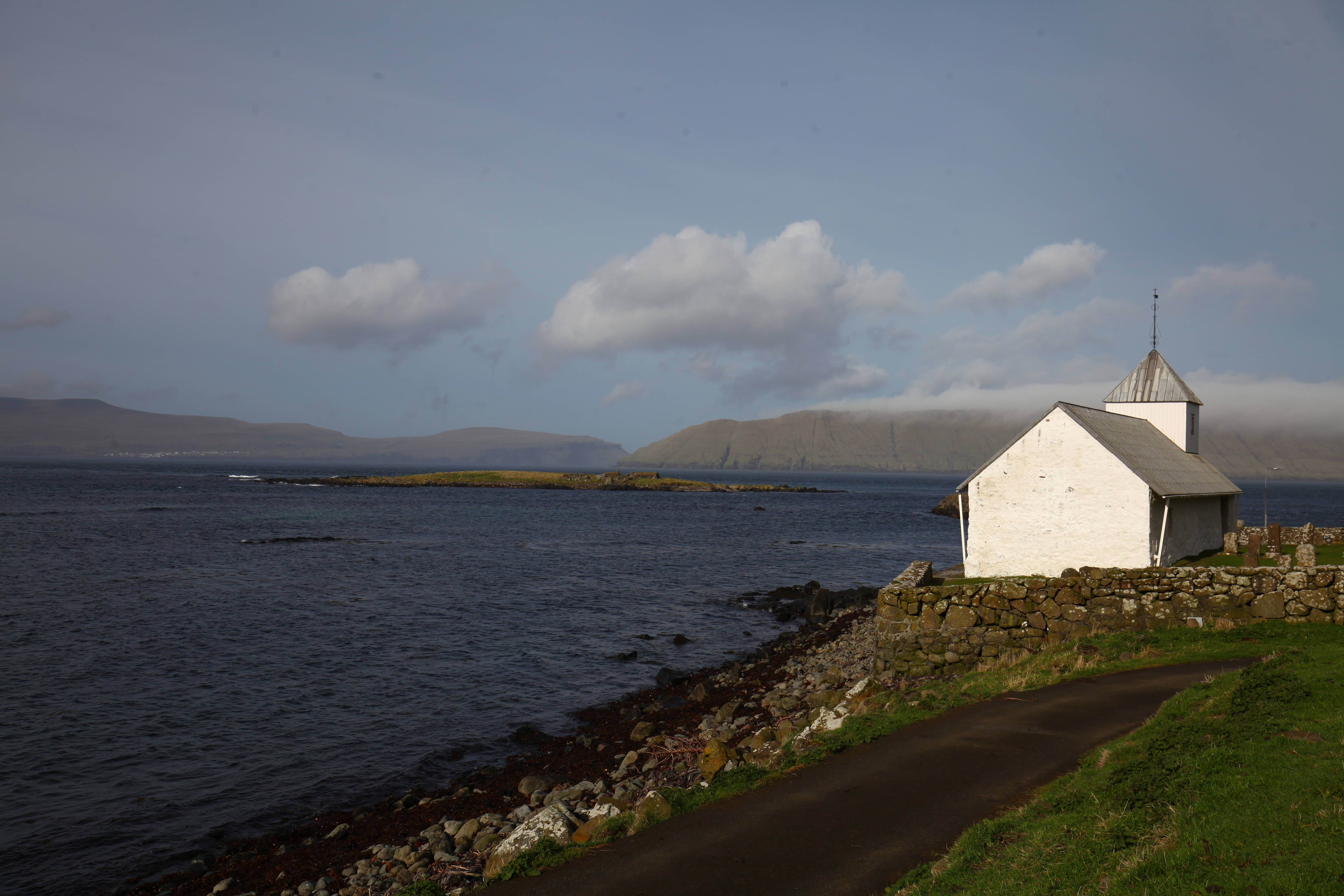 Again s very early morning. The hotel bed is good. I am well rested. Breakfast and then I jump in the car to get to Kirkjubour. Only 13 km from Torshavn and the oldest settlement on the Faeroe Islands. An nice old church, some old wooden houses and an old stone church (which is a ruin now). Great view over the Atlantic. You can take the ferry to the southern islands here.

The sun is coming out. That makes me spontaneously change my plans and I will tour the northern Islands today and Torshavn tomorrow. Good weather must be used. I set the GPS to the furthest reachable geocache in the village (if you can call 4 houses a village) of Muli. No one lives there. About 90 km drive. Short stop at a supermarket in Klaksvik. The road to Muli offers some great views, but has more holes than my socks. The car is not the optimal choice for the tour, but it works out well. To get there you have to drive through two old tunnels from the 1960th. They are one lane only with priority for northbound traffic an a lot of meeting places in the tunnel. No light at all. If you are claustrophobic – don’t go there.

Going the same way back to Klaksvik. The second biggest town on the Faeroe Islands has a church, a swimming pool and some possibilities to dive. That’s it (according to Tripadvisor). So this is just a small stop.

Back through the second of two undersea tunnels (nice light installation at the lowest point). Collecting some more caches and the weather is getting woorse. It is getting windy and the clouds re coming back. The islands are known for their weather changes.

But as I am already on the road I take a small detour to Vestmanna. A stop at a nice viewpoint and even I have problems standing still in the storm. I don’t want to be on a boat right now and neither do I want to fly from the airport. Toooooo shaky. 🙂

Dark clouds and strong wind when I get back to the hotel. Grabbing my swimming gear again (bad weather activity) and go back to the pool, but not without stopping at the cinema for a ticket for tonight. After some lanes in the pool and  visit to the sauna I want to see the shopping mall. But there is not much to see. Some small shops, no people. Not the center of the universe here.

I grab some food at a small asian place close to the hotell. Not the best food I have tasted, but the people there were friendly. Going to the cinema. King Arthur (3D) – luckyly I asked a guy if I was siting in the right cinema as they are not marked in any way. Well done, I sat in the wrong one (I didn’t want to see The Shack). But the film hadn’t started yet (in fact the guy had to open the cinema first). The film was OK.

Back to the hotel, writing the blog while the storm and the rain work outside. Tomorrow it will be a day in Torshavn. I hope to have some better weather as right now.